Inspired by my week cycling in Mallorca, I was itching to get my Ribble Sportive 7046, which had been idle in a garage for one year and collecting dust in a bedroom for three,  back on the road.  So on the 10th March I took the cobweb covered, dust smothered machine over to Evans Cycles in Chelmsford.  Slightly embarrassed by its state, I was greeted by a friendly mechanic, who not only opened the store early for me to drop it off, he didn’t even judge me for it never being serviced since leaving the factory, or indeed, not having ridden it for so long.  A mere four hours later, the same mechanic was enthusiastically telling me how it had been lovingly restored to a working, well oiled shiny two wheeled roadster.

The mechanic was keen that I take the bike back in four to six weeks to ensure that none of the bits that he had taken off and put back on, come off again through the vibrations of the rough Essex country roads.  This obviously shamed me enough to turn the Mountnessing March Walk in to a cycle route the next day to get the wheels rolling.  I was even shamed enough to actually get out on the bike and with Sandra in tow, it was just like being in Mallorca again, although, without the sunshine, blue sky and the heat.  Oh, there was no coast line to either, but there was a ford to, erm, ford, which obviously I rode straight through without a thought of my own safety and didn’t in any way go over the bridge in an attempt to preserve the smooth running of the bike for as long as possible. 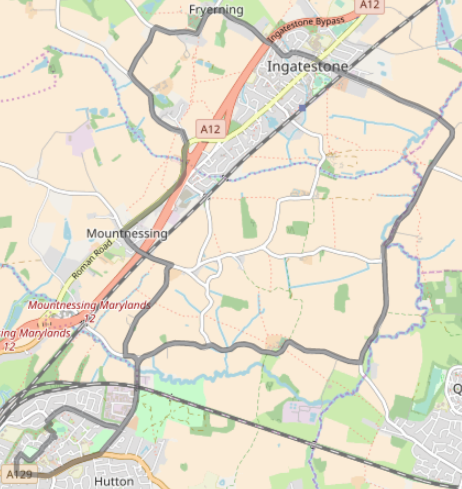