This trip was built around a friend’s 40th Birthday weekend in the Yorkshire Dales. Booked up in a post-car owning, pre-pandemic world, it was an obvious choice for us to take our bikes on the train to, perhaps, a Penrith or a Carlisle and cycle on to Swaledale. With a ride back to Lancaster after the celebrations, a fairly easy couple of days of no more than 60 miles each way lay ahead of us.

But that was pre-pandemic and with July’s Tourmalet trip cancelled due to the world being on hold, we needed some other adventure to fill the gap. So, actually, this is the trip that escalated to being a 460 mile cycle ride along the length of England. With over 6,000 metres of climbing; across nine counties from Gretna Green to Newhaven, this was our most ambitious and longest bike-backing trip to date.

Gretna Green was chosen as the start for this trip for at least 50 percent of the reasons people choose to get married there: it is a town just over the Scottish border and still close to England. It was also within a rideable distance of Keld (although I expect this is less of a concern to those people wanting to get hitched without having to go through all that unnecessary administration required south of the border).

Holding of the nerves aside, planning the trip wasn’t easy. Gone was the ability to book trains more than two weeks in advance, and with West Coast Mainline trains only having space for four bikes, we were nudging the wire in terms being able to get ours up to Scotland. Still, once secured, the booking of bike friendly hotels fell neatly, if not belatedly, in to place.

Newhaven was chosen as the final destination as a smaller, less populated alternative to Brighton whilst still having a railway station for the homeward bound journey. The dots were then joined by Komoot which, except for the little adjustment to bring our overnight stays on to the route, was relied upon totally to get us to the south coast.

As I was planning on doing a small hike when in the Dales, I needed to set Dylan up with panniers so I could take walking gear as well as the minimal amount of cycling kit, evening wear and underwear. As Sandra was planning to stay in the hot tub at the Swaledale Yurts, she could get away with using her saddlebag to carry her swimming costume. One of us had the right idea.

One of us had the right idea planning ahead with the servicing of our bikes. I had chosen to use a local bike shop in Shoreditch for Dylan’s checkup, booking him in on the Monday before the trip. This proved somewhat disastrous, as radio silence was imposed at the earliest opportunity. Twice on the Monday and Tuesday I called for an update. Twice that update came back with a vague notion that the bike was still awaiting an assessment. Unsure of why I went to the trouble of booking the bike in for a particular time and day, I picked up poor, un-serviced Dylan on Wednesday morning. I was venturing out on the longest, most adventurous trip with nothing more than a cleaning of a drive-train. It wasn’t me with the right idea.

The day of the trip finally arrived and once again we were at Euston Station waiting for the train to take us to Carlisle. Once bikes were loaded, our specially reserved cyclists seats located, we were on our way. Within a few short hours of judging two middle aged women holding on to the notion that excluding the nose from their mask coverage was somehow acceptable, we were in Carlisle once more.

We repeated our photo taking, our foraging for snacks and our confusion over how to start the ride from our 2018 Coast to Coast trip before finally setting off towards Scotland. Through little lanes and rolling countryside we came across another cyclist who was also heading to Gretna and who was also putting their faith in Komoot for the first time. In hindsight, his story that Komoot kept directing him through fields, despite his clear road bike setup, should have acted as some kind of warning, especially since the delays he experienced on his trip from Blackpool was going to result in his wife murdering him when he reached Gretna. I was more interested in why you would wait until you reached the middle of the field before you started questioning the route.

The last couple of miles of England fizzled away along a nondescript road parallel to the M6 and Scotland, in an equally nondescript way, fizzled forth. That said, there was opportunity to stop off at the border, drink Irn Bru and take photos before heading through Gretna Green and back towards the motorway, now snappily named the A74(M), and the services on which our hotel was sited.

Now of course, we weren’t going to ride along the motorway like the Sri Lankan cycling team did during the 2014 Commonwealth Games but, as by this point we trying to navigate to our destination by memory, we mistakenly took the road out of Gretna Green which was later to form the motorway’s slip road. So alarmed by this, an extraordinarily kind driver stopped at the side of the road to give us directions and to ensure we didn’t become a headline in the local paper (or a statistic with the local NHS). And as soon as you can say ‘kindness doesn’t strike twice’ another helpful local gave further instructions to ensure that within no time we were tucking in to a slap up KFC in our luxury Days Inn hotel room. 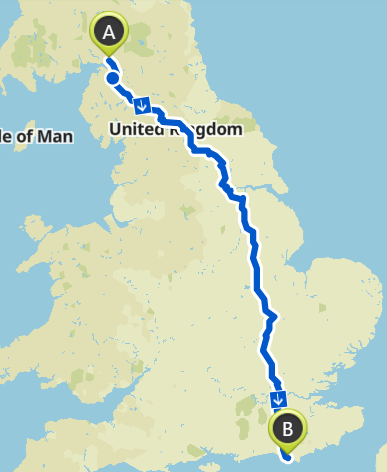 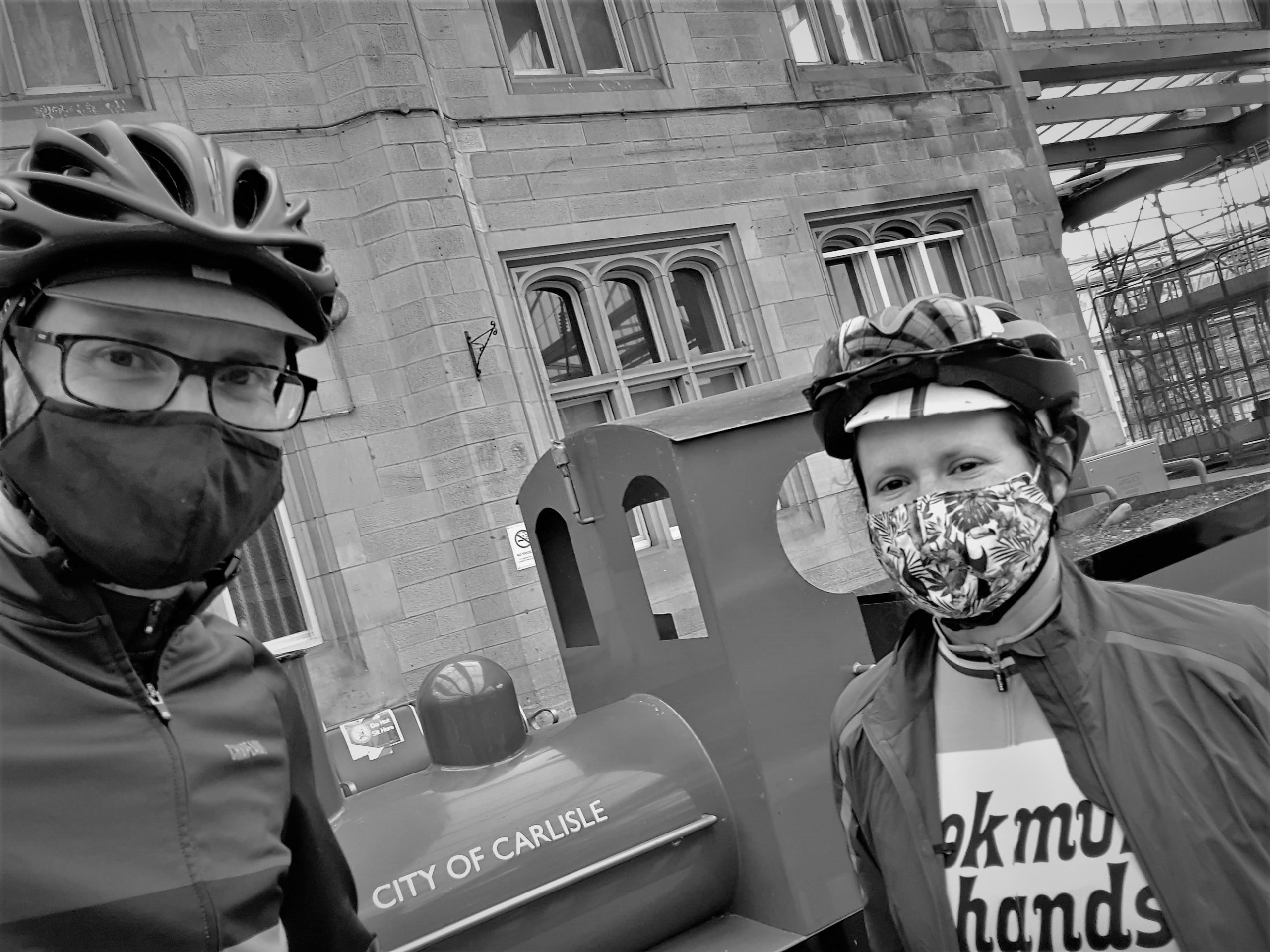 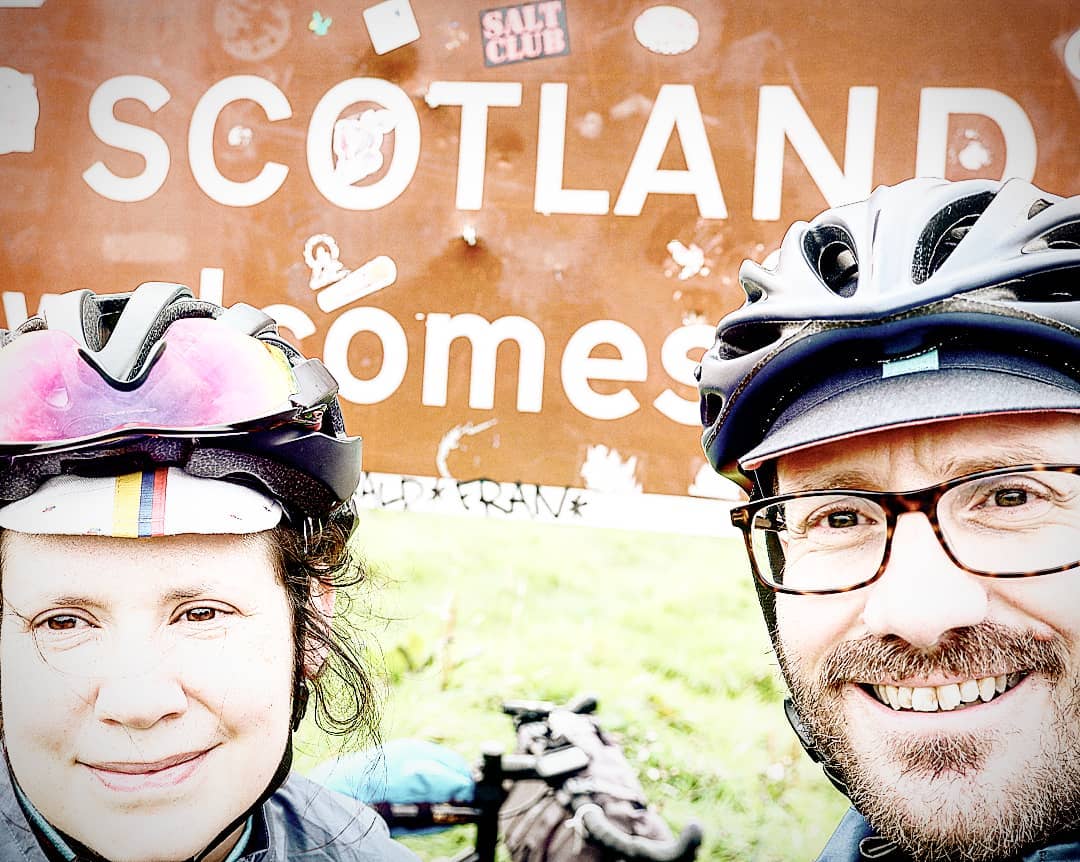