According to the Met Office website, on the 21st of October 2017 the resulting weather system after the Hurricane Ophelia resulted in Storm Brian being given its name by Met Éireann.  As fate would have it, this was also the weekend that the combined schedules of myself and a friend had settled on weeks before to complete the Yorkshire Three Peaks.  A weekend still within British Summer Time, so with still enough light to give us a fighting chance to finish before being plunged into darkness.

I could just copy and paste the section from the previous Three Peaks entry about leaving work early on a Friday to get up to Yorkshire in plenty of time to enjoy and relax during the evening but instead getting stuck in the gravitational pull of London and the M25 and every other subsequent traffic jam on the way up to Malham Youth Hostel.  But, but, but, whereas all this is indeed true, this time I wasn’t going to Malham as I had left the booking too late and was going to Ingleton Youth Hostel instead; I did not have pizza and Black Sheep Best in the Youth Hostel lounge, but a pie and a few pints of Wainwright Golden Ale in the Three Horseshoes Pub, Ingleton; and, importantly, there was an incredibly dramatic stormy kind of backdrop to the whole weekend

When, at five o’clock in the relatively calm and stormfreeness morning, we started the 14 mile drive to Horton-in-Ribblesdale, avoiding fallen branches and puddles so large they looked tidal, I had thought, possibly out of a refusal to look facts in the face, that Brian had done his thing and gone off to wherever storms go when they finish storming.  The wind was light in the car park as we were making final preparations to head off; still light just over the river when a kindly local pointed us towards to the correct road towards the trail, and possibly even lighter still when I had to get out my map to find the point at which the trail left the road (this navigating by head torchlight is really difficult).

As I discovered in August the Yorkshire Three Peaks is very well signposted, especially after Pen-y-ghent, and although, obviously I came prepared by bringing the relevant 1:25,000 map, I had hoped not to use this as, in reality, I was well aware of the stormy conditions and the difficulty that using a large paper map may bring.  Instead I put my trust in a guide by another Brian (Smailes) called The Yorkshire Three Peaks Walk (sixth edition) which I can’t recommend avoiding enough.  I had hoped it would meet the excellent standards of the Trailblazer Guides which have incredibly detailed annotated mapping in clear and concise English.  Notwithstanding the fact that the book is poorly designed and amateurish, it uses language, which although technically correct, is not in everyday usage: why use the term metalled road, when you could just say road? The fact that it has been resurfaced using tiny stones is irrelevant, especially when it is dark and I can’t tell what the surface of the road is.  At trail junctions, the author gives the bearings necessary to successfully navigate them.  Why not state ‘take the left fork’; ‘take the sign to . . . ‘; ‘follow the Pennine Way’.  Guide books are there to make things easier for the reader, anybody wanting to navigate by bearings will have already marked up their map before leaving home.

Anyway, whinge over . . . did I mention it was dark? Things do look so much different in the dark. and when we had finally got off the road (metalled or otherwise), we started our ascent of Pen-y-ghent, successfully navigating the smaller limestone obstacles and bouncing lights coming towards us worn by trainer clad blokes who had decided it was too dangerous when the got to the halfway point and had aborted.  Slightly unnerved by this, we pressed on through improving conditions as the dales were starting to glow with orange as we were reaching the first serious part of scrambling of the climb.

At this point the worst Brian of the day remained the author of the appalling guide book so on we pressed to the peak.  The second and final serious scrambling part however was where other Brian started to take prominence and I wouldn’t have hesitated to abort if wind speeds had been this high earlier.  Now however, it would have been more risky to go down than up, despite the fact that my map case was twisting around so much it was strangling me, and that my head torch, which I had placed in said map case for safe keeping, had decided that it wasn’t safe and had made its own way back down the peak.

Apart from still being alive, our prize for making it over the top was a thirty mile an hour head wind on the short section up to the trig point and the actual summit.  Luckily, or possibly by design, there are some shelter giving walls up there which provided respite while we refueled; took the obligatory pictures and contemplated the loss of my head torch (it was a montage of glorious nightly scenes from the Coast to Coast; West Highland Way and Thames Path Challenge).  Luckily however, just as I was getting into the most painful memories of the Thames Path, two guys from Brentwood and Southend (who I don’t know), came up the peak behind us, with head torch in hand. 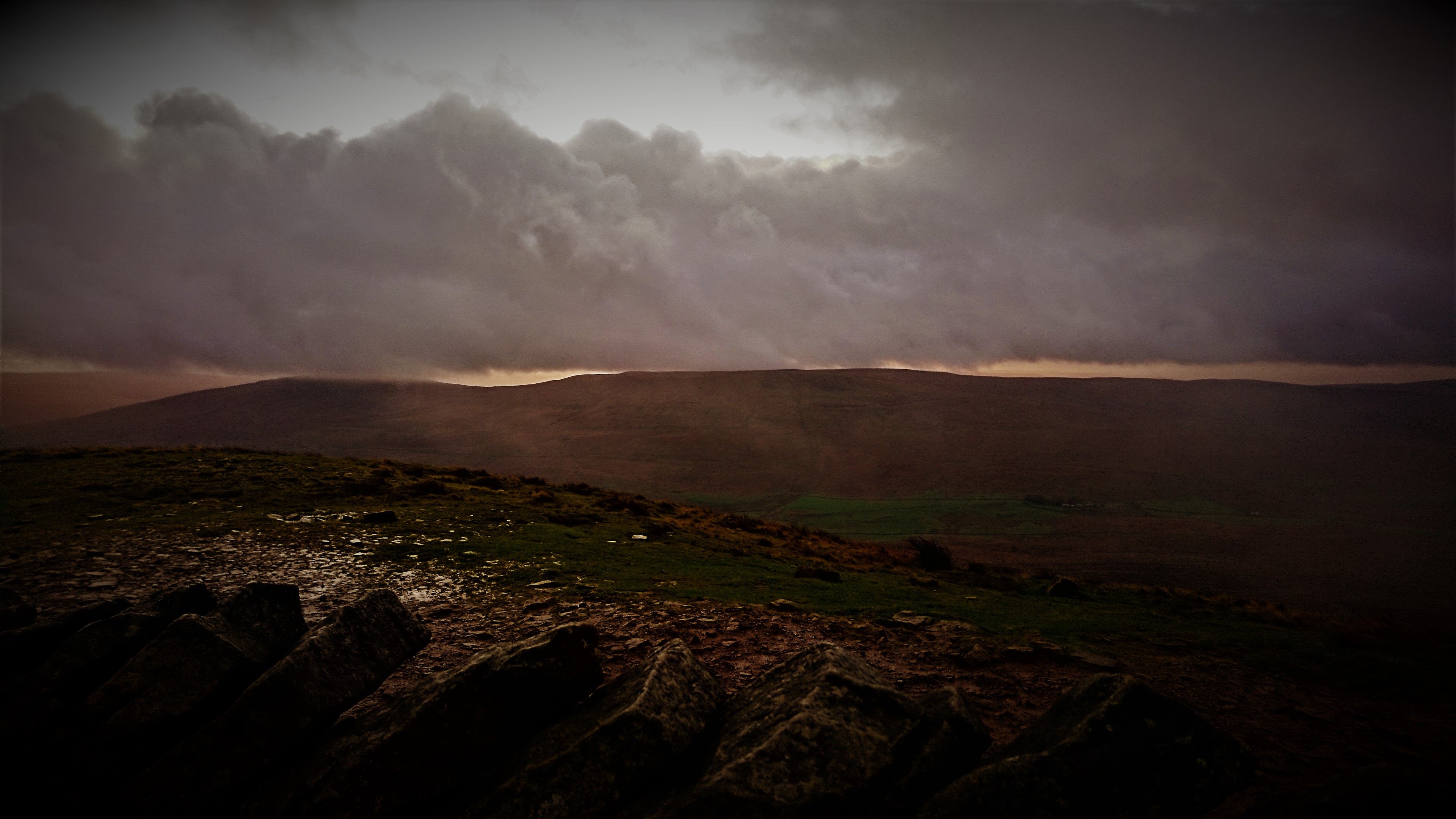 Although reunited, as it turned out, that was the only peak we did despite improving conditions as we dropped in altitude, we were now aware of the conditions up top and by the time we had reached the Ribblehead Viaduct it had also started raining heavily. Concerned too that the conditions were slowing our progress too much and not wanting to be coming back in the dark in a storm, we decided to skip Whernside and try for Ingleborough by cutting through the arches and meeting up with the trail between the two peaks.  But even this was thwarted with wind speeds picking up in the valley, I didn’t really fancy being blown off the near vertical climb up Ingleborough.

So we headed to the train station at the Ribblehead Viaduct via the nearby Station Inn Pub.  The landlord greeted us with a shake of the head and questioned our sanity for wanting to go out walking on a day like today, but welcomed our dripping and muddy souls wholeheartedly in to his pub which had Black Sheep Brewery Golden Sheep (3.9%) and a live departures board for the trains (actually this was on a black board above the bar, but with trains this infrequent, this is the height of technology.)

With the barman recounting stories of walkers being blown off Whernside and two of my hostel roommates describing the conditions up there being akin to being sandblasted we had definitely made the right decision to stop. Back in Ingleton, over tea and cake in the Curlew Tea Shop we decided to check out a day early and head back down south. Unless the film 2012 comes true, the Yorkshire Three Peaks will be around for another day.