The bicycle is king

We had a ferry to catch today, so started early. So early in fact that it was still dark, and at 3.30 am, it was definitely early enough to raise questions about my holiday choices. We were cycling from Calais to Amiens today so were heading to the Port of Dover to channel hop whilst attempting to miss the height of the school holiday exacerbated, Brexit traffic chaos.

Our traffic worries were unfounded. Not only was the hotel conveniently situated next to a cycle path leading directly to the port, once there, cyclists have their own exclusive, traffic free ‘red line’ to follow. Inside and outside the port we flew past queuing motorists, some of whom had probably been there for weeks.

Once through passport control and check-in, we had our own embarcation lane and priority boarding. This meant once we had tied our bikes to the ‘rack’ on the ferry, with knots an able seaman would only be able to wince at, the pick of seats in the on-board cafe would be ours.

After 90 minutes at sea, we were docking in Calais and, for our safety, allowed off the ferry first. We took full advantage of our escort, tasked with leading us out of the port, by tucking in closely behind, eeking out all and any drafting advantages we could. Through security gate after security gate we were finally deposited on the first cycle path next to the complex. It was around 8 am and we were ready to start our first day proper. Once we had located the route.

Calais looked much nicer three weeks ago on the on the ITV Tour de France highlights show than today at 8 am. It wasn’t the weather. The sun, albeit a little more muted in the early morning, had the same head wear Gary Imlach saw all those days ago. It was the point of view. His backdrop of the impressive town hall was taken from the ornate Parc Saint Piere to the west. Ours: the rather more industrial landscape of railway lines and canals from the north. We were also seeing Calais as it actually is. Dwelling on images of the tents of the homeless scattered throughout the centre is probably not high on the priority list for a municipality paying a hefty fortune to host a stage of Le Tour.

With admittedly less pomp than Le Tour, we passed quickly through. Out along the Calais – Saint Omer Canal and, after around 12 km, in to the snappily named Parc Naturel Regional des Caps et Marais D’Opale. Due to having little water as a result of an earlier administrative error, a few kilometres later, we stopped to refill in Guînes just after we finally finished reciting park’s name.

One cheeky Capri Sun from the Le Carre D’As Tabac later, we were about to hit our first categorised climb of the day. In the spirit of Le Tour, I had decided, completely arbitrarily, that today there would be eight major climbs based on nothing more logical than their vague prominence on the route profile.

Topping out at 136 metres, Climb One offered the sort of distant views of the La Manche that failed to materialise yesterday across the English Channel. Laid out behind us was our first, pan flat 20 kilometers and, with 90 minutes on the clock, we were starting to realise this was going to be a long day in the saddle.

The climb made us hungry, although to be honest, it was one of those days where hunger had permanently set up camp. After just another ten kilometers we found a junction next to a corn field, in the middle of nowhere, to eat highly calorific energy bars.

Proving really difficult to digest, despite our snail like pace, after Climb Two came and went, our stomachs started demanding real food. Half way up Climb Three, we hit the biggest town since Calais, Desvres. Komoot was determined to take us in and out of the town as efficiently as possible, bypassing the town square and the Cafe de la Place which Google had alerted us to. With most of the villages seemingly ghost towns, we didn’t want to miss our opportunity for a pit stop. We made the detour and were tucking in to fizzy drinks and anaemic toasties sooner than you could say the name of a French regional park.

Refreshed, we headed off with the purpose one can only muster having discovered an Aldi was a short distance further along on the route. Loaded up with Haribo, nuts, Orangina and pizza things, we were ready as we could ever be to finish off Climb Three. At a 167 metres this was our highest point of the day and, as this was le touring, not Le Tour, we took another quick 10 minutes on the bench at the top to recover.

Self check-in in the Air BnB was going to prove useful. We currently had just short of five hours on the clock for just short of 50 kilometers. At this rate we wouldn’t be getting to Amiens for another 11 hours!

Prompted by a trucker pulling up to have a rest next to our bench, we pressed on secure in the knowledge that the next 30 km were all down hill. 80 minutes passed in a relative blur of 22.5 km per hour before we hit the bottom of Climb Four and the halfway point at Brimeaux. Here we found a nice grassy patch at a fork in the road, to eat our pizza and have 40 winks next to a plaque commemorating 200 years of The Republic.

Although the slow pace was initially concerning, we did have to get in to the mindset that we weren’t really in a rush. Save for the fact that the supermarket closest to the accommodation closed at 8 pm, the apartment wasn’t going anywhere. And there was a MacDonald’s! It was 3 pm when we moved on. Even with more breaks (which were going to happen), we would get there for 7 pm, surely.

Somme places I’d been before

The 2.6 km climb was a minnow compared to the Mur de Desvres, but it hit suddenly and with force, maxing out with an 11% gradient. We plateaued for a few kilometres in view of some dark clouds before before undulating up and over Climb Five towards L’Authie river and just a few hundred metres from a cottage I stayed over 16 years ago.

We had crossed in to the Somme Department and our second snappily name national park: The Parc Naturel Regional Baie de Somme Picardie Maritime. Imagine the cartographer who has to get that name on a map – no wonder these places cover such wide areas. The roads were now wet. The dark clouds, formerly in the distance and been doing their job. Honestly though, the left over precipitation was a welcome relief to the heat of the last few days (on and off the bike).

The top of Climb Six at Crecy, at the 100 km point, was another opportunity for nuts and Haribo and a chance to immerse ourselves in some Anglo-French history at the site of the Battle of Crecy. More picnic area than war zone these days, it was an ideal place to spend 20 minutes while reading about the Hundred Years War on Wikipedia.

Historically and nutritionally sated, we headed off. It was around 4.30 pm; we had 40 miles and two categorised climbs to go. We were pushing upward of 7.30 pm on the Will-the-Lidl-be-open-o-meter.

Climb Seven was long at 14 km, but not difficult with an average gradient of just 0.6%. It did however, max out at 7% and did finish off on gravel in the shadow of a multiple wind turbines which probably made it gnarly. The descent was fast and loose and going well until half way down when Sandra clipped a rock. As this pinged off to the field to escape justice for having pinched her rear tyre to the point of flatness, we were left to pick up the pieces. The Lidl-o-meter exploded in a puff of metaphorical smoke as we spent the next 30 minutes changing tubes and exercising our upper body with pathetic compact hand pumps.

The final climb was a Komoot classic. The lower slopes might have been possible if we hadn’t already ridden for 137 km over 11 hours, but there were too many branches, bricks, rocks and muddy ruts in the first 20 to 30 metres than our brains could cope with. The second part of this climb, after a short sharp tarmac descent, warmed us up with thick loamy, clay which was too much for Sandra’s narrow tyre clearances. Waiting at the top for someone who just wasn’t appearing, I tentatively went back down the slope again to find her attacking caked on mud with a stick.

Close to home, we used most of our remaining water to clean the parts other sticks couldn’t reach and with wheel rotation becoming a thing again, we were able set off down hill towards the Somme and in to Amiens.

Komoot wasn’t going to take us through the centre of Amien, and with our accommodation in the north west suburb we approached from, we weren’t in a hurry to explore the city and add more miles to the day. The parts we did see were most definitely shut. Supermarkets, Tabacs, you name it. Shut. I imagined everyone ran away bang on eight o’clock, battening down whatever hatches they have, in case bandits were to ride in to town looking for trouble.

We were just looking for food, and eventually we found the only option open to us at this time. MacDonald’s. Although Sandra looked at me strangely when I said I wanted a chicken burger and a Big Mac, she didn’t turn down the hamburger that came free with my Big Mac Meal when offered. Like I said, hunger had set up camp.

We reached our accommodation just before 10 pm, 13 hours and 45 minutes after leaving Calais. It was an epic day’s riding and, at 160 km, it was a record for me on Dylan and his 42mm mildly knobbly tyres. 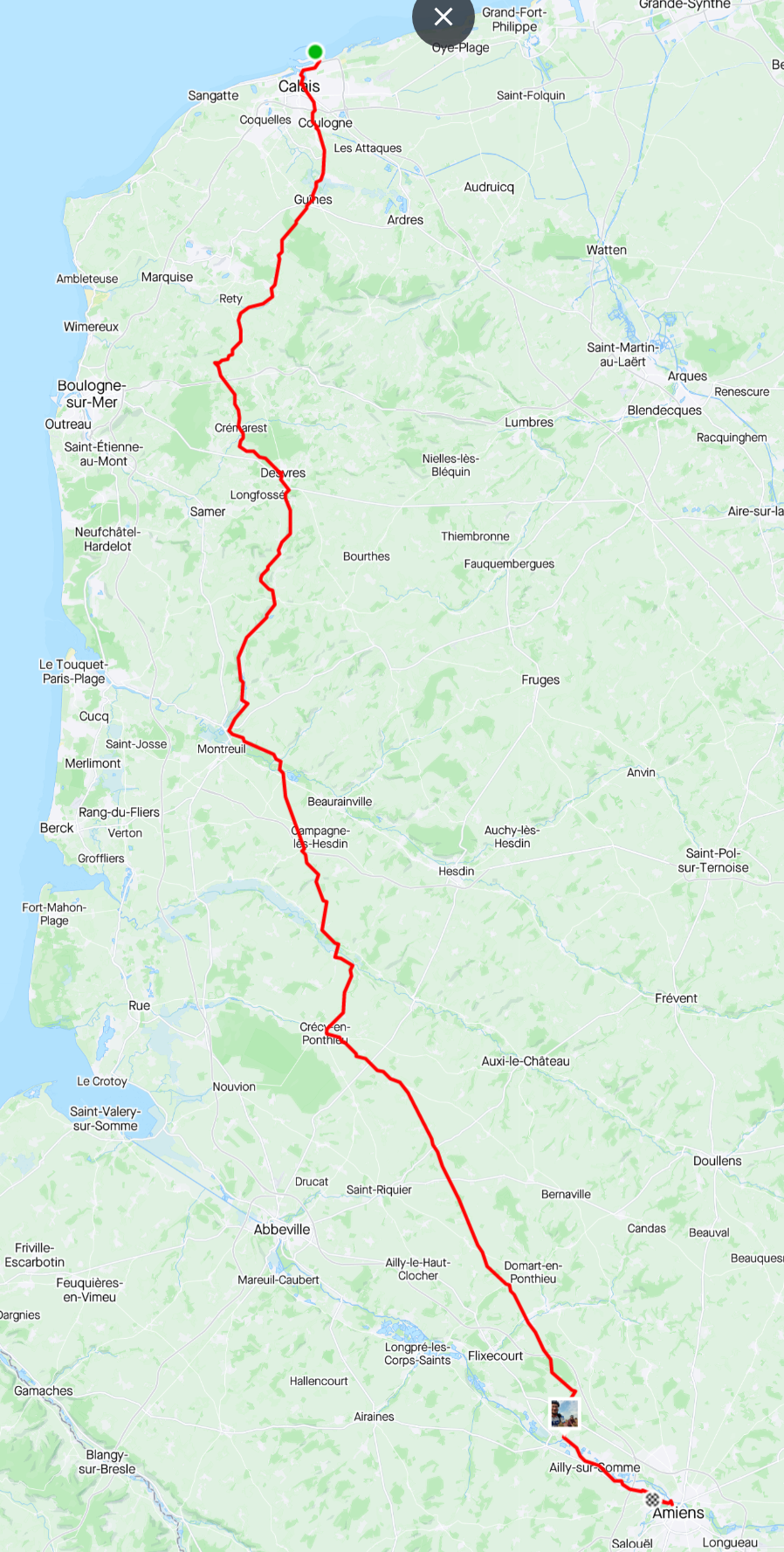 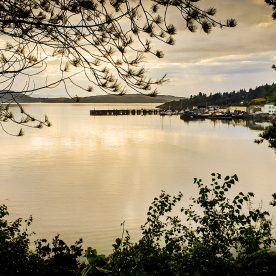 Day Three of the North Coast 500 turns out to be a day of contrasts.... 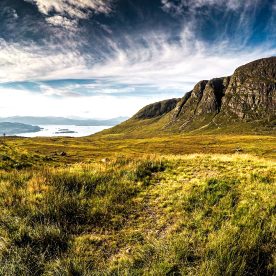 Day Two of the North Coast 500 sees us tackling the highest mountain pass the... 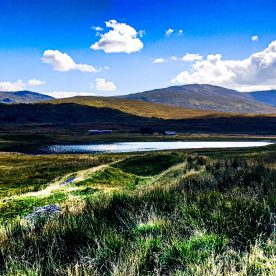 Cycling the North Coast 500. Starting out in Inverness and trying to get to Applecross,... 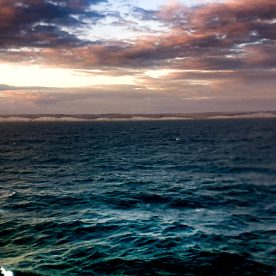 In order that we didn't miss our Ferry, we let the train take the strain... 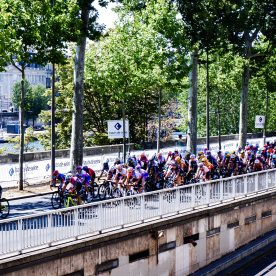 Having arrived in Paris yesterday evening, today was the day of two tours. We set... 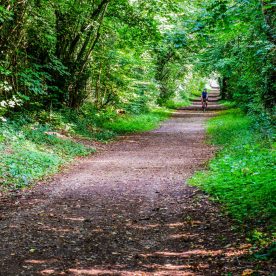 After diverting away from the Avenue Verts, we take the ever busier roads before arriving...