One of the things with hotels and B&Bs is that you tend to get going quite late. Breakfast, especially in the smaller B&Bs, is a relaxed affair, taking place at un-stupid o’clock and often in good company. At the Heatherdale B&B that morning we spent about an hour talking to our host and other guests. So carried away we were with our conversations, the idea of actually cycling from Gairloch to Ullapool had taken a back seat. It was 9:30 am when we finally hit the road.

We decided over lunch last night that Gairloch would definitely be a place we would want to come back to without our bikes. With trips out to sea to look at whales and dolphins just the very tip of an aquatic themed iceberg, we resolved to explore this area more thoroughly. Preferably with the aid of a car and more than one set of clothes.

Riding through the village proved to be so much more than just the harbour, bank and pub we had seen the previous night. This was the largest place we had been to since Inverness and, we were surprised by the choice of shops and range of restaurants from Creole to Chinese.

The route didn’t look particularly challenging today with only three noticeable climbs. That the first of these was the climb out of Gairloch when we were still rested, fed and watered was a bonus. The effort only really started to tell once we were on the smaller energy sappers between this and the second climb at 40 kilometres.

I had gone ahead today, safe in the knowledge that this stretch of coastline was less remote and well served with local amenities at Poolewe, Aultbea and Laide. The plan was to meet up at Badcaul at the halfway point where there were rumours of a nearby café.

Climb number two was in the way of that though and with the Wahoo stuck on 8% for what seemed like an eternity, it was no comfort when I found it was equally capable of displaying 10, 11, 12 or even 13% gradients. The view at the top over Little Loch Broom was worth the sweat and effort and, at this point, I was just 12 kilometres away from Ullapool. If I had been a crow. As a cyclist, I still had around 50 kilometres and one big climb remaining.

Badcaul was a couple of kilometres down the hill so, after five minutes of taking photos and chatting to cyclists coming the other way, I made my way down to an empty looking area with a bench, some bins and a bus stop. Sandra, also noting the baron nature of Badcaul, flew by in a blur despite my screams that everyone else in the Highlands probably heard. When I caught up, we decided the thought of going climbing back up the hill on the off chance Google was right about the café, was too much to bear.

With the route getting more and more remote until Ullapool, if we hadn’t had our cooking equipment, a tin of tuna and some rice, we would have had no other option but to turn around. As it was, we found the next available rock, cracked out the Jetboil and cooked lunch by the side of the road.

Having successfully not set fire to the surrounding heather, we set back off down the remainder of the hill in to the distinctly shut Dundonnell. The final climb of the day started shortly afterwards. Twisting and turning claustrophobically in the trees for the first half of its 13 kilometres before becoming increasing more open and exposed and, thankfully, flatter in the upper section. With the clouds low over the mountain tops up ahead and the weather generally getting bleaker, when I reached the top, I decided to layer up and jump down in to a ditch for a bit of shelter to wait for Sandra.

One Snickers Bar and apple later, she crested the hill and we flew down the relatively straight, 14 kilometre descent in the cool highlands air. The rain never really materialised and, as we turned right on to the main road in to Ullapool, we delayered for the final stretch.

Just like Shieldaig a couple of days before, the route would have by-passed the main town if we had let it. But this is one of the biggest towns on the North Coast 500, with ferries to Stornoway, chip shops and a Tesco, it’s worth popping in, even if it’s just for a fish supper on the harbour wall.

For us, it was the end of the day and, having secured the last available room at the Caledonian Hotel, it wasn’t long before we were securing our bikes in a store room and roaming the maze of corridors to get to our room. Now, where’s that chippy? 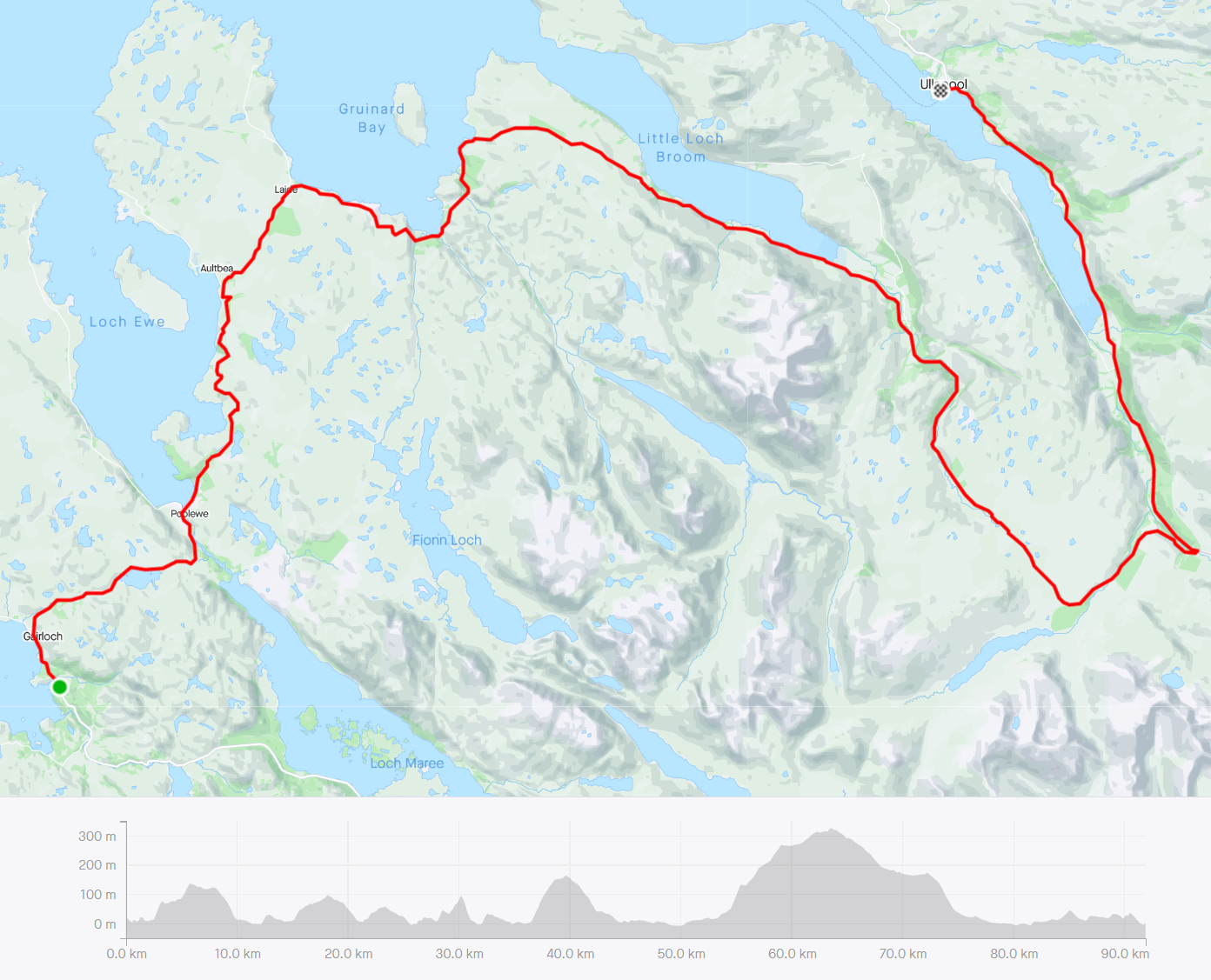