If you had told us that two and a half hours after leaving Tongue, our plans of cycling to Brora would be replaced with the rather more disappointing destination of Thurso, we probably wouldn’t have believed you. Well, we might have done. After all, Thurso isn’t as random a destination as say Oslo, but still, it wasn’t the part of the plan.

The day started normally enough: chatting to other NC500ers, loading up the bikes, climbing up a steep hill out of the village. It was a reasonable start time too with us on the road at just before 8:30. With the lowest amount of elevation since day one, everything seemed set fair for us to start turning south today and getting to Brora.

We still had to reach yesterday’s intended destination of Bettyhill 20 kilometres down the road and with 300 metres of climbing along the way, second breakfast was more than tempting. Strangely enough not tempting enough to drink Starbucks at the Bettyhill Hotel, or go down the hill in the wrong direction to the local shop.

Almost after the first, or at least the second undulation, we regretted that decision. Despite having already hoovered up the remaining energy bars, we would have soon been gnawing our own arms off (or at least those of strangers) if we hadn’t stumbled across the Coast Coffee and Tea place in a layby. Here Karen, in her well appointed former horse box sold fine coffee, sausage rolls and cake, wrapped up in friendly conversation.

We spent quite a while re-energising and enjoying the sun as people came and went until we could delay no longer. Safe in the knowledge that, according to Karen, the hills were about to get easier, we set off. Or at least tried. All it took was one push down on the pedal from Sandra for her chain to ping, rattle and slump on the floor beneath her.

We had spare quick links and chain breakers for just such an emergency but after an hour, despite my best efforts and those of selfless passers by, it was impossible to get the link to snap in place.

During all of this, Karen, whilst still managing to serve and chat to her customers had enlisted her husband, Brian, to drive up to see Simon. Simon, an actual bike mechanic, with a stash of actual bike parts, in the middle of actual nowhere, had, conveniently for us, moved up to the area a couple of years before.

Even more conveniently for us, Brian had a van, and was not only willing to take us to Simon, he would have even taken us all the way to Thurso, if we had needed it. Unlucky though we may have been to have this mechanical, we couldn’t have chosen a better place to have it.

We had now accepted that we wouldn’t be finishing the NC500. By the time Karen had supplied us with more more coffees and Brian was loading us on to the van, it was gone 1 pm. With 90 kilometres to go to Brora, we had to accept that it was game over this trip.

Still, thanks to the efforts of everyone around us, we didn’t have to suffer the expense of a rural taxi and Simon got us up and running within the hour. With Tongue now a distant memory, we started cycling gingerly towards Melvich where we sealed our decision to continue straight on to Thurso by booking the Premier Inn over a cheeky ice cream.

We arrived in to Thurso at a very reasonable 5:30 pm. having taken around 1 hour and 40 minutes to cover just 17 miles over just 210 metres of elevation. Tomorrow, we would get the train to Inverness and spend our spare day in search of Nessie. 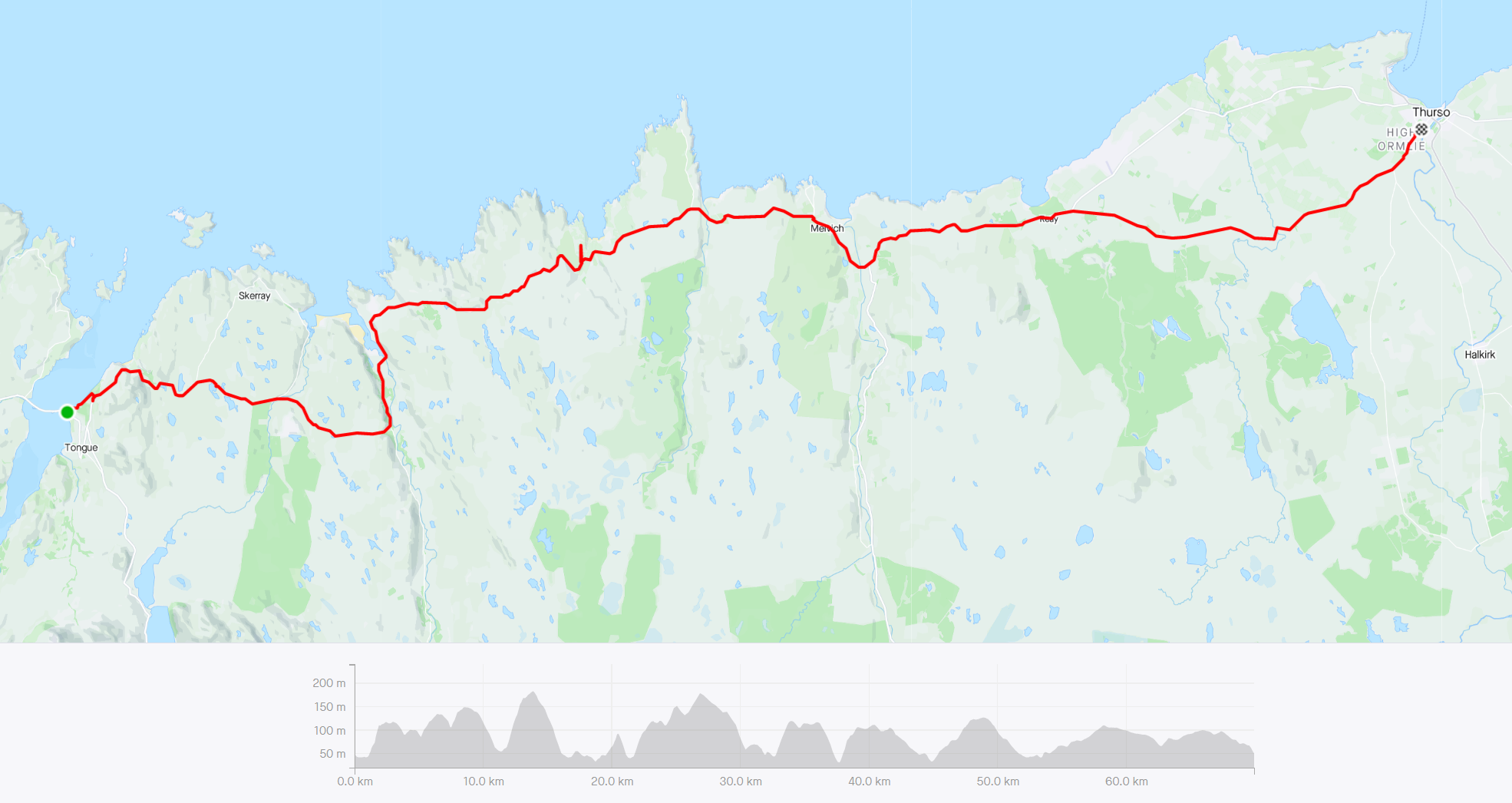