We crawled out of our two person tent, slightly relieved to be emerging in to the cool, fresh, morning air at around 6 am. After a few moments of reflection of what the dya had in store, we were slightly less relieved at the thought of cycling the Bealach na Bà today. It took two hours to tuck in to our overnight oats and brake camp before we set off towards our goal of Gairloch around 130 km and 1,900 metres of climbing away.

We didn’t have to wait long for our first dalliance with vertical ascent either. Out of Lochcarron, it was just 2 km before our first serious climb, not only of the day, but of the trip so far. A minnow compared to what was coming up, but with gradients of 8% and 13% almost immediately, it wasn’t messing about.

Still, it was short and the next 5 km through the village of Kishorn and on to the shores of Loch Kishorn were largely downhill. If it hadn’t been for stopping to take photographs of distant ships and oil rigs, it would have been a speedy delivery to the foot of the imposing Bealach na Bà.

From the outset, the single track road means you have to negotiate on coming and faster confluent traffic on a road that is open to most vehicles. Caravans and anybody not capable of reversing their vehicles substantial distances to aid the flow of traffic are prohibited. Ten tonne trucks however, are apparently not. Impressive though the sight of seeing one of these negotiate a tight hairpin bend it is; squeezing yourself against a crash barrier at the edge of a steep drop or tight up against a stone wall to allow one passed was not a particularly pleasant experience.

Although, at 848 metres, the title of the highest paved road in the UK belongs to Great Dunn Fell in Cumbria, Bealach na Bà is the longest at around 9 km.
Rising from sea level to 623 metres, the Pass of the Cattle, or Applecross Pass, is by far the highest point on the NC500. It is also the most iconic. Built in 1822 it winds up the mountain side, one hairpin at a time on a narrow, single track road which was only tarmacked in the early 1950s.
From the Kishorn side, the first half lulls unsuspecting cyclists in to a false sense security before punching them in the face with continued gradients above 10% for the remaining 4.5 km.

At the halfway point, I took a cue from a couple relaxing at the side of the road to enjoy view and found a rock upon which to soak up my achievements. Largely because there were no real steep gradients at this point and it was easy to build a rhythm, it had only taken me 32 minutes. Sandra joined me shortly afterwards and, around 35 minutes later, after we shoved food down our faces, we were moving again.

Almost immediately, the gradient shot up and it was all I could do to hop from one passing place to the next before I needed a break. I realised that anything much over 14% would probably be my getting of and walking breaking point. However, with car driver patience and support surprisingly in evidence for people with their luggage strapped to their bikes, I managed to get to the false summit still in the saddle. Albeit after another hour and 18 minutes.

Calling it a day

With time ticking away, I started toying with the idea that we should just stop at Applecross for the rest of the day. Sandra initially dismissed this idea at the top of the hill, but, after a very fast descent in which our brakes over heated and faded to varying, trouser filling degrees, the lure of the campsite at the bottom was too great to pass by.

Luckily, despite being three hours early for normal check-in, the campsite had a camping pod ready for us to use. With a short trip on our recently unladen, now lightweight bicycles out to the local shop in the next village to get supplies for later, we were able to relax for the rest of the day.

And for those wondering why we didn’t take advantage of the Applecross Inn. Apparently Tuesday closing is also a thing, but at least there is a sign on the Kishorn side of the pass so you don’t end up needlessly cycling the Bealach na Bà. 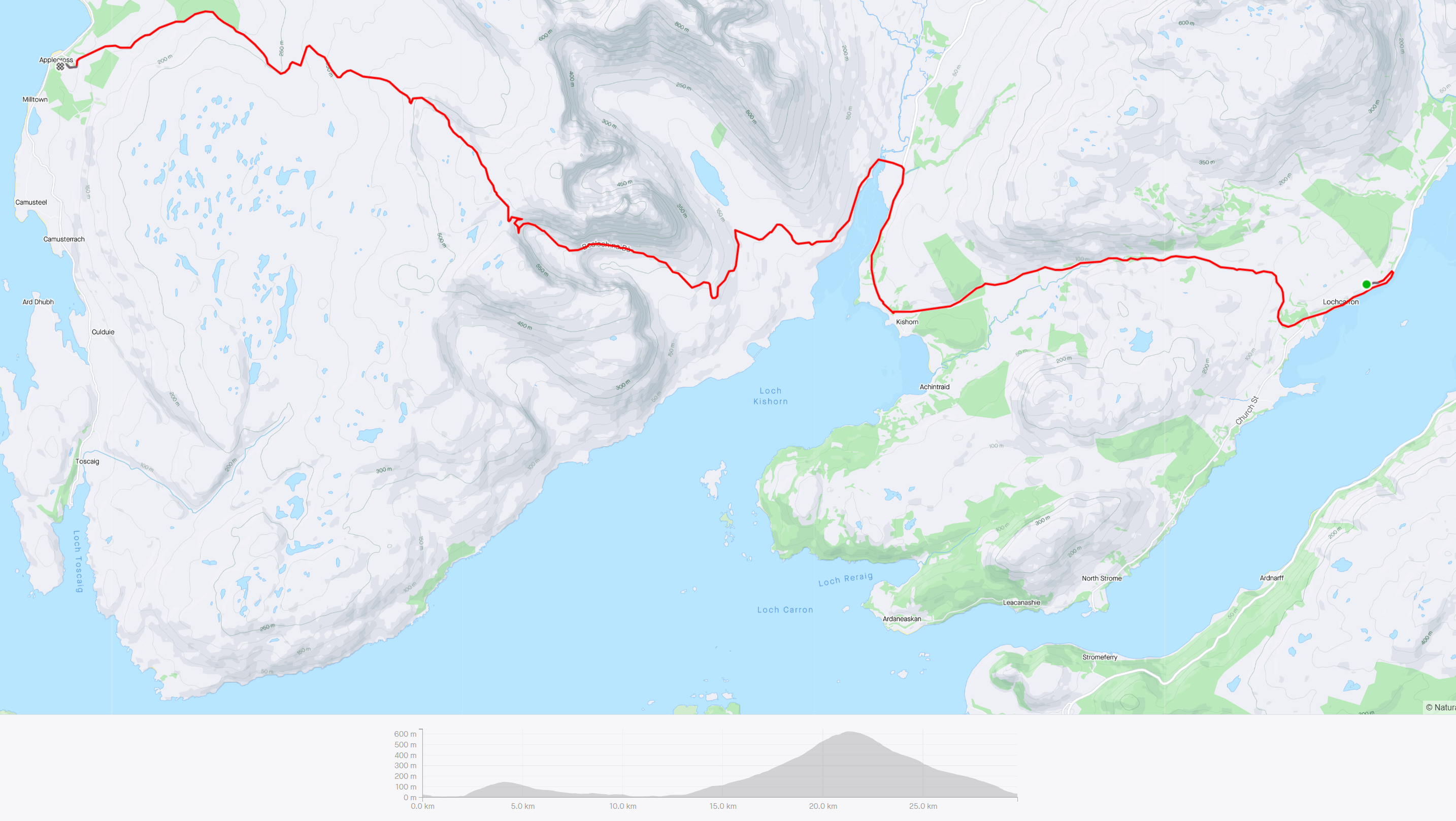