As Ash and I wanted to get started on our final 15 miles to Fort William at 8 am, the morning ritual of bag packing started at its usual, ridiculously early time with the customary undoing of Gigantor’s disgorging from the previous night, so as to be ready for breakfast at 7 am.  The tables were laid out in a caste system depending on your chosen level of accommodation. Those who had forked out the very reasonable £70 room rate were treated to their own table, with the finest(?) white tablecloth; those who had gone for the less expensive, cabin option, still had the immaculate white covering, but were forced to share with the other cabin tenants; and finally the campers: lumped together in the corner, table naked as the day it was built.

This didn’t deter Ash, who chose not to choose breakfast, save for coughing up a mere £2.50 for all you can drink coffee supplemented with butter. By the time I had finished lording it over the rest of the guests at breakfast, retrieved my pack and checked out, he was a blur of caffeine fueled energy. I on the other hand, with clearly deficient levels of caffeine, could have done with sleeping off my breakfast instead of making the climb out of Kinlochleven on to the ‘Big Pass’. By the end of this section not only was I wishing I also had six cups of coffee, but in my mind had relegated the Devil’s Staircase to the third toughest climb of the walk.

The weather was typical of the week: low cloud with rain ranging from potential to actual, but, as it was the last day and I didn’t feel like sweating profusely as a result of wearing my non-breathable rain jacket, I picked the one small patch of blue sky as my scientific meteorological reasoning to pack it away in Gigantor’s top pocket.  This proved to be the correct decision up the first climb of the day, and it only really started getting really damp when we came across the first of the ruined shepherd huts on the route.

Stopping to ‘proof up we came across a lady with a small, Yorkshire Terrier based dog in her rucksack, who, upon being released (the dog, not the lady) thought it would be the funniest thing ever to chase every sheep he came across until he was so tired he was in definite danger of falling over his tongue which, by this time, was lolling so far out of his mouth it was almost touching the ground.  Now apparently, sheep get quite stressed when chased by dogs, and, on the Coast to Coast there are signs put up by the farmers stating that they will shoot dogs found to be doing just this kind of thing. Luckily, sheep probably outnumber people at least a million to one in this area, so the likelihood of one of these persons being a farmer with a gun wanting to shoot a dog is slim, however, how well intentioned the dog may be, for their own safety, please keep them in a rucksack (or on a lead).

The halfway point of today’s walk was marked by a map board, which was completely coincidental, as I don’t imagine it knew where we left from that morning, however, it did give us a potential shortcut.  Follow the West Highland Way to the finish, or go by the road and save a massive three miles.  This, obviously was a non-starter given my quite obsessive insistence on sticking to the trail, so we ploughed on towards the Nevis Forest where we stopped for lunch.  Beyond the cheese and pickle sandwich the route saw us venture further into a forest, which we subsequently discovered wasn’t as foresty as stated on the map.  The logging industry was taking its cut and in places the trail had become just a mash of fallen branches: proof that the landscape of rural Britain is actually an industrial rather than natural one.

We managed to find our way out of the former forest in to a hollow with a ancient Fort site high up on one side and the wide forestry commission track and the West Highland Way slightly less high up on the other. Now, I really can’t justify relegating the Devil’s Staircase to the fourth toughest climb of the walk, but with Gigantor becoming restless, a week’s worth of walking in my legs and a longing for the finish and the promise of a pint at the end, it was a closed run thing.

A dog and his cycling family greeted us by the time we got to the track with the father telling us how amazing we were for completing the walk and how difficult the climb he had just ridden up was.  We took this as encouraging news as it meant that we were downhill all the way to Fort William.  We were also beside Ben Nevis by this point, but with the cloud as low as it had been all day, we were none the wiser.

So, one more pitstop, and off we headed down the trail, on to the A82 which we had tracked all the way from Loch Lomond.  The traffic getting ever more dense, ever more noisy, ever more dirty, every more smelly.  Commuter mode kicked in as the pace increased to get the job done, stopping only to have our photos taken by the monument that marked the old official end of the West Highland Way (the person who took our photos almost stating with glee, as if we didn’t already realise, that we had another mile to go).  And then, we crossed the line.  96 miles from the outskirts of Glasgow, across the lowlands in to the Highlands.  We shook hands, had photos taken by the bronzed statue of a walker and celebrated with a couple of pints and carrot cake at the local Wetherspoon’s pub (The Great Glen).

The only thing that remained after that was to buy some extra clean clothes for the rest of my time in Scotland, do the laundry at the hotel and find somewhere that sold pizza.  I achieved two out of three of these, but was disappointed to see that there was no Pizza Express, and resigned myself to nothing more than a meal deal from Tesco, I was suddenly accosted by a Marine disparaging my pathetic limp and who dragged me in to the pub to eat a three course celebratory slap up.

Having shared stories of the last few days, I discovered that all of a sudden it was my turn to mock Rich.  He hadn’t actually completed the walk, hadn’t actually crossed the quite clearly marked finishing line.  This made me laugh, directly at him, which to be fair is probably the bravest thing I have ever done. But after dinner I, walked him to the end, laughing even more loudly when I realised he had got as far as the Wetherspoon’s just metres away, and celebrated the completion of a fine walk for the second time today.

And that’s it for the walk.  We fetched Ash and drank into the early minutes of the 23rd hour . . . well, it had been a long week! 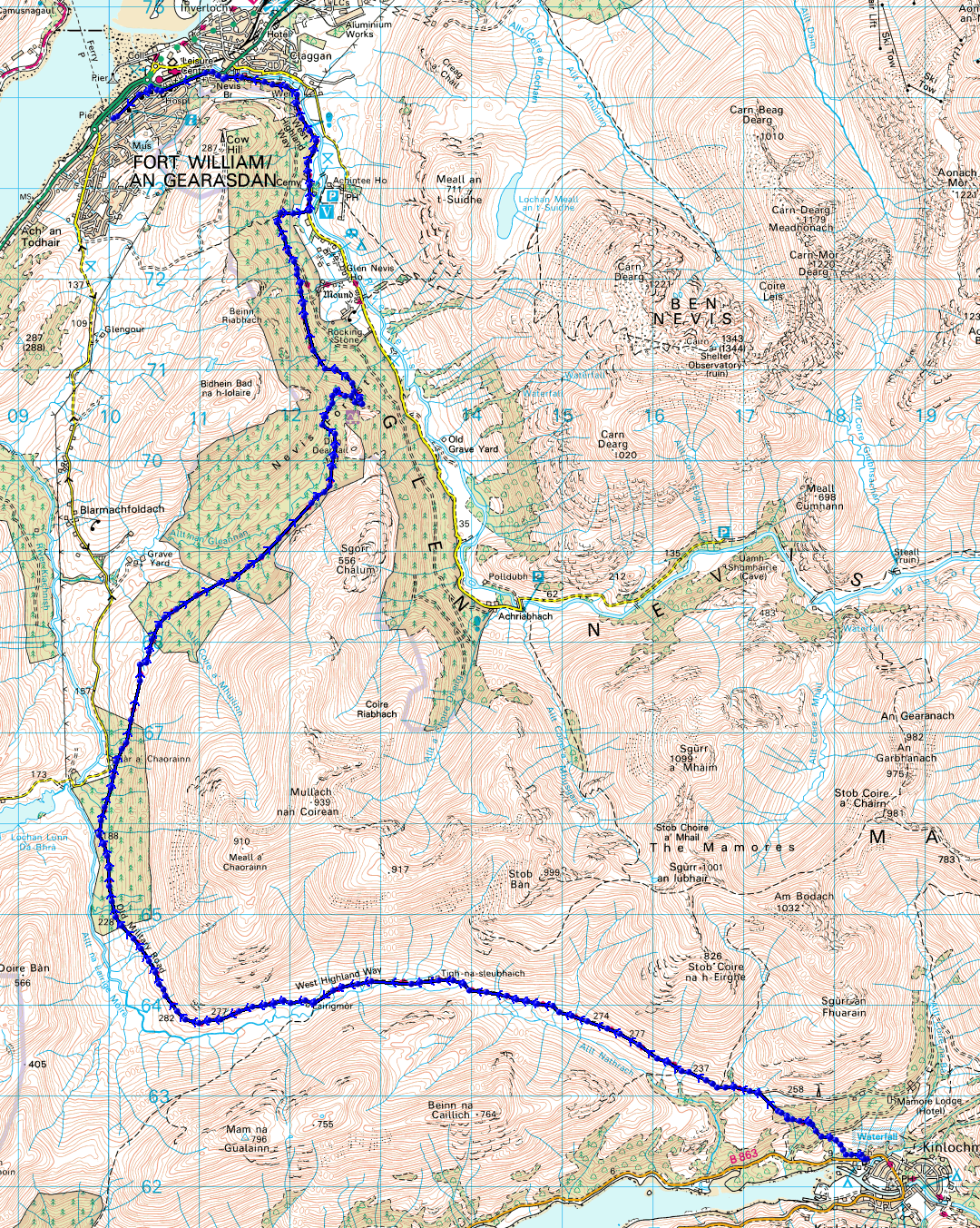