My first look out of the Hobbit Hut at 7 am showed a landscape bereft of the mountains of the previous night. Somebody had clearly stolen those to the left, right and centre of me and if it wasn’t orcs or hobbits, it must be the devil whose staircase I would be clambering up this morning. It took me an hour of undoing Gigantor’s content explosion yesterday and, with the cafe not opening until 9 am, I thought I would head out, fastidiously retracing my steps back to where I had left the trail so I didn’t miss any. This was starting to become an unhealthy obsession.

After a mile and a half, Kingshouse revealed itself as quite the popular overnight stopover and, despite the hotel being closed, there was a bunkhouse, licensed cafe and lots of wild campers. This isn’t wild camping in its truest sense. Yes it’s free, and strictly speaking it doesn’t have facilities of its own, but those of the bunkhouse seem to be available to all and with the cafe providing breakfast, it’s not exactly man against the environment. In fact, even the wildlife is tame, with deer often seen hanging out around the picnic tables probably hoping for a tasty morsel from a passing hiker. I was pretty sure that they wouldn’t want a freeze dried curry dish, so I took a photo and moved on.

Within a mile of Kinghouse, I (probably) spotted Rich’s tent away from the main collective noun, but as there was no sign of life, I headed on to the foot of the Devil’s Staircase a couple of miles further down the trail: ahead of me, a mile climb up to the highest point of the West Highland Way.

It didn’t surprise me that I would see Rich, his philosophy for the walk is to walk until he is ready to stop and pitch up, it was however a surprise to see the familiar figure of Ash on the early slopes of the staircase.  Somehow, using some kind of witchcraft, he managed to get in front of me on the trail again. Today was supposed to be his long day from Inveroran to Kinlochleven, but he must have left stupidly early to have passed me today.  As it turned out, it wasn’t so much witchcraft as the number 900 coach.  A little fact Rich didn’t let him forget in the pub the previous night.  So catching up with him on the zig-zag section, we walked together for the next six miles or so to the finish at MacDonald’s Hotel.

The actual climb was actually more impressive by name than it was by physical exertion. Don’t get me wrong, it isn’t easy, but I felt Conic Hill was tougher, perhaps because it was just straight up, perhaps because I wasn’t as fit, or Gigantor was heavier at that time.  The hardest part was realising after the summit, there was another small climb which definitely wasn’t advertised in the guidebook! Still, once over that it was downhill all the way.  With the weather only just starting to improve it was too late to get an early glimpse of Ben Nevis, but we were able to appreciate the almost Norwegian looking Kinlochleven as we walked along the water pipes used in hydro electricity production.

Obsessed by the weight a potential wet night out camping would add to my tent and Gigantor’s load on my back, I secured a room in the Hotel and by 1 pm we were sitting on the balcony, sipping a pint of Cairngorm’s Wildcat Ale, looking out over the salt water Loch Leven which, at its western most reaches, connects to Loch Linnhe, the body of water upon which Fort William is sited.  The West Highland Way was almost at an end. 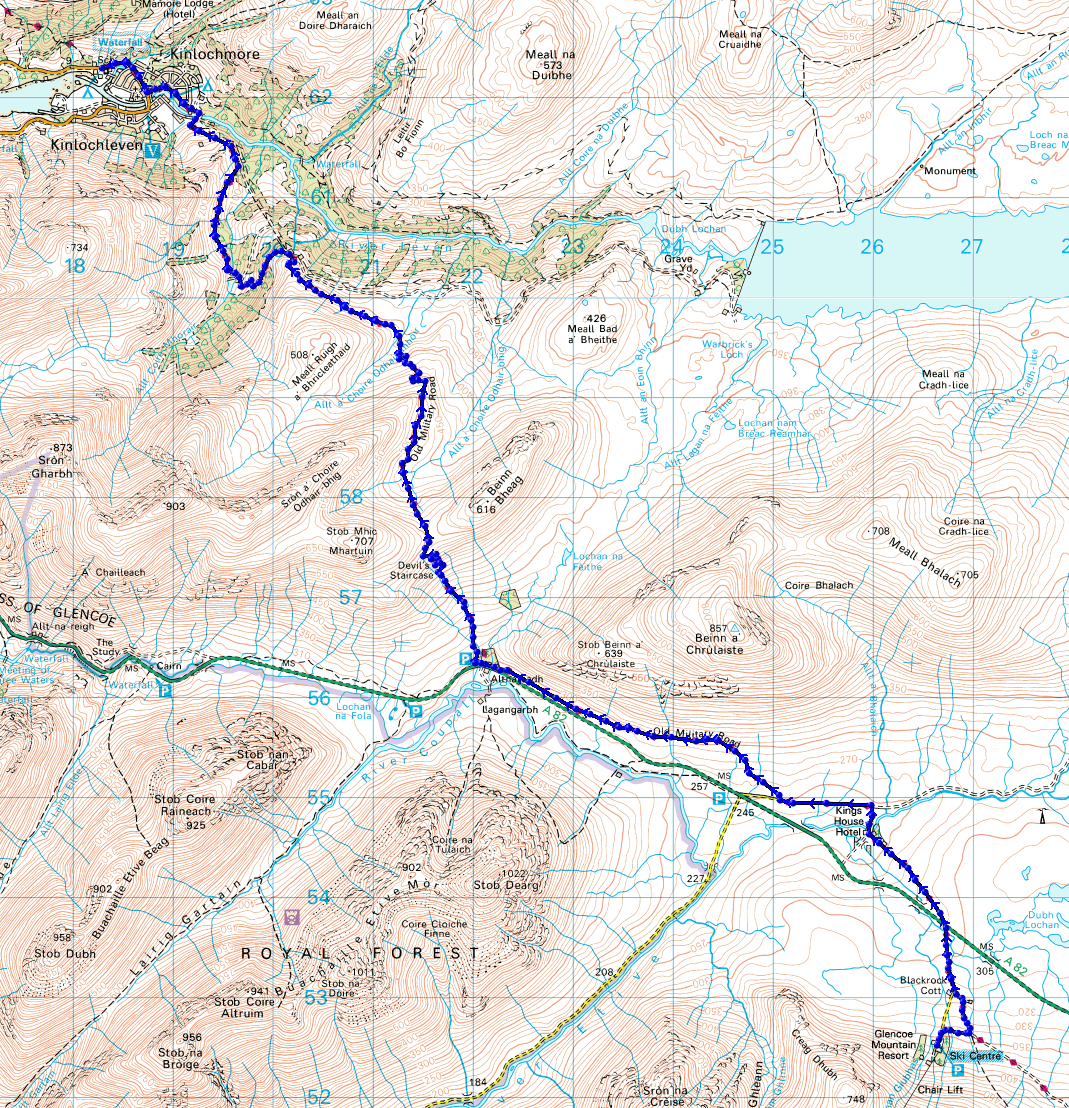