The morning started as it meant to go on: with extremes of weather: inside my tent, dry, warm and calm; outside, wet, cold and windy. This was a pity as it meant I had to overcome an overwhelming desire to stay in my peachy, isolated microclimate, and go out into the monstrosity that was swirling around me. I performed my practiced shuffling dance whilst changing from my thermals into my walking gear and pack my bag, before poking my head out of the tent to view a less than appealing world.

In reality I didn’t have much of a choice, after all, I came to walk the West Highland Way for seven days, not sit in a cattle farm wondering if I could charge my phone from cow manure (which you can, by the way, with the right equipment which I had unfortunately left at home).

So off I set at 8 o’clock down roads so familiar it seemed like just yesterday when I had walked them last . . . ahem. It was without a breakfast because it was too cold to hang around (did I mention how bad the weather was this morning?) so I thought I’d find somewhere along the trail to cook up a dried culinary delight.

This is a tangent, because before all that, I climbed Conic Hill, one of the biggies on the trail and caught sight of Loch Lomond once more. It had been winking at me for the last 24 hours (by virtue of me completely missing the campsite yesterday), but now it was coming into full view. More impressive than this though, I saw my first snow topped Peak off to the right ish (that Geography degree certainly not wasted here) which I think might have been Bein Breac.  With snow still on the smaller peaks, the distillery tour is more likely than a hike up Ben Nevis.  Yay!

There was a rainbow off in the distance too, but this was being buffaloed in to submission by the very rain that had helped to create it, so it didn’t last long.

Now I can talk about the pub, although probably covered most of it except to say I was there so long waiting for the kitchens to open I had waded through two strong ales and a packet of dry roasted before my food arrived. One more pint and an interrogation by a member of a wedding party wanting to know everything about what I was doing, later (note the comma, it makes for a completely different sentence to the one you’re thinking I wrote), I got on my way again safe if the knowledge that I would be suitably fortified for the remaining seven miles to the Youth Hostel at Rowardennan.

Probably would have been okay if I wasn’t drunk and if the terrain had been flatter rather than the undulating torture that the guide book had described (to be fair, it didn’t use the word torture). However, Loch Lomond is quite pretty, and there lots of serene beeches to stoll along and stuff, but it just kept going up and down and up and up and down (oh wait that’s what undulating means) which made it really hard work. I mean, I am not fussed, but Gigantor was practically in tears with exhaustion!

The situation wasn’t helped when I saw the Youth Hostel only to discover it was a car park toilet block (look, my best friend for this section was a talking backpack, mistaking one building for another is quite normal).

So, I finally rocked up at around 4.30 and feel I have to apologise to the two ladies who asked, just outside Balmaha, how far it was to Rowardennan as they had to make an appointment there at 4.30. They were reassured that it was so close, and were convinced that they’d make it in time (a rendezvous with a mini 1930s German U-boat armed with their secret intelligence designed to keep Britain out of the up coming war is the only feasible reason to have a deadline in Rowardennan, surely)?

Anyway, food, conversation, shower, bed. Tomorrow will be another day. 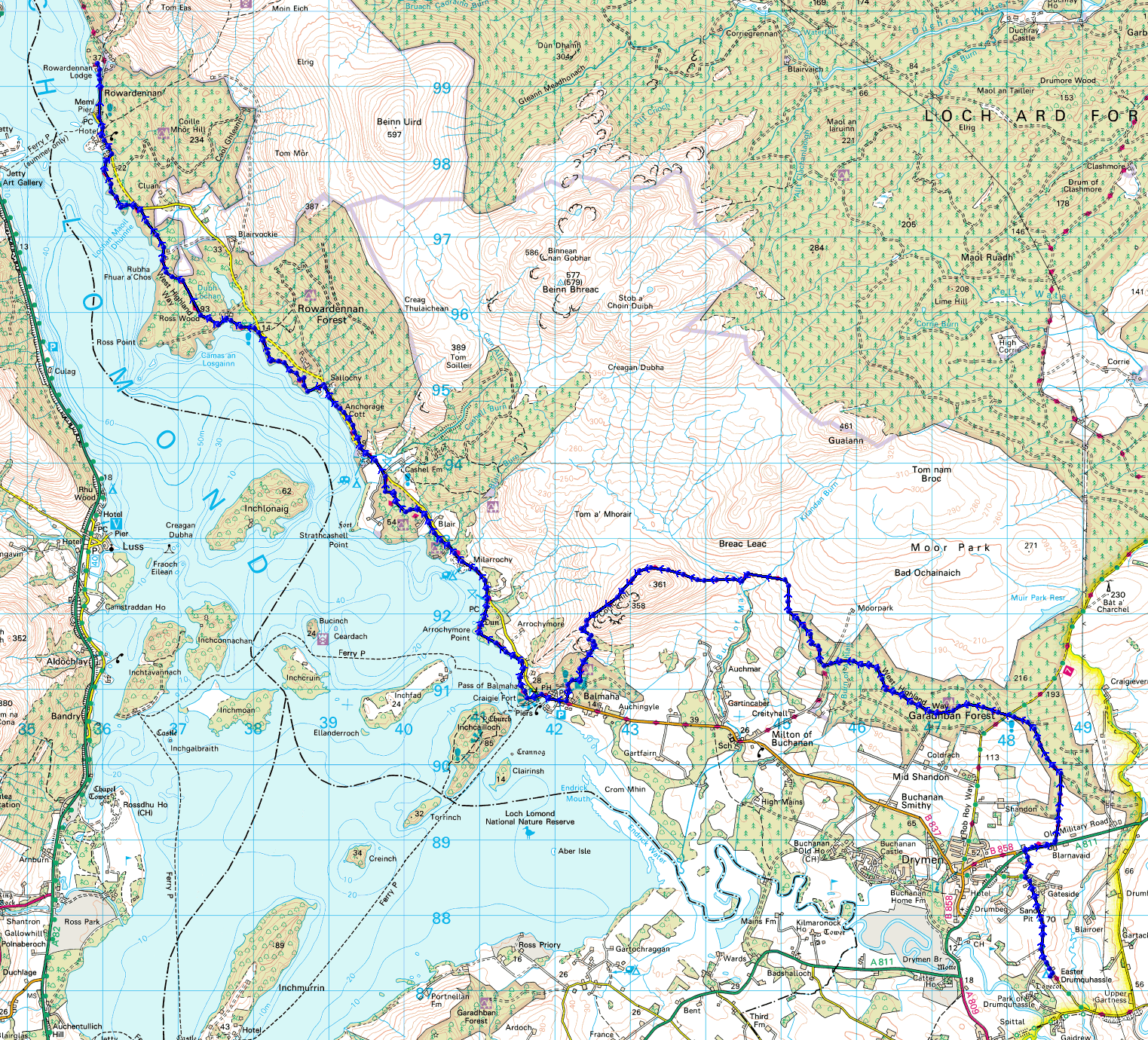