We hadn’t really thought about which way around the island we were going to cycle, however, as clocks are wise, this seemed a good way as any. Besides, a lady with a dog, interested in our bikepacking bags in Portsmouth said that is the best way because the hills wouldn’t be so steep (and who doesn’t trust ladies with dogs?)

So with 100% of those surveyed expressing that preference, all that remained was to find the route, which, as we had come in to Niton on it the previous evening, and with our accommodation a few hundred metre from the start, it wasn’t difficult. Well, technically, we were at the mid way point as the official start is in Cowes.

Anyway, I digress. Back to the plot in which I was about to tell you how confident I was in stating to Sandra that we wouldn’t need a GPS route as it would be perfectly well signposted. A statement undermined only by the slightly less confident action of finding one on the Internet and transferring it to the Wahoo!

So off we went straight out of Niton and up a hill up to Blackgang and Chale, with just the scenery and thoughts of ‘if this clockwise is easy, how bad is anticlockwise Mrs Doglady?’ running through our minds. But we finally levelled out a bit and turned inland for some quiet country roads. To be honest, even when we had turned back on to the main road, for a bank holiday, it wasn’t exactly rush hour there either. It was steep though, with two climbs up over chalk downs before a speedy descent into Freshwater Bay and a probably not so well, deserved cafe stop.

Yep, we had only done a quarter of the route, but, hey! We are on holiday. And it was really hot. And we were almost out of water. So it was definitely necessary. Unfortunately, however, it gave me time to contemplate the terrible, terrible consequences of getting a puncture as neither of us had brought a pump. We had tyre levers and puncture repair kits in abundance, but I wasn’t convinced I could blow up a tyre with just my lungs. Not only that, the descent had reminded Sandra how poor her current brake blocks were compared to the shiny new ones she had in her saddlebag.

So a quick internet search later revealed Adrian’s cycles was just 0.9 miles away in Freshwater just seconds off the route, tucked away in a mews, exactly in the place a man with a kayak had described when we asked for directions. Just to be clear, he wasn’t rowing the kayak down the street, that would be silly, rather he was pushing it on a trailer.

kayaks aside, the bike shop was amazing and you should definitely pop in should you be doing this route. It’s small, but you’ll get your essentials like energy gels, food, clothing and bike pumps and inner tubes and other stuff. It also has a small workshop too and the friendly mechanic fixed the brake blocks and overhauled the dodgy rear cassette (his words) on Sandra’s wheel all for a tenner! Meanwhile, the owner (Adrian, I presume) not only liked my Storm Trooper Cycling Jersey, also said that Dylan was cool which allowed me to enter in to a wonderfully long historical review of his humble beginnings and rise from his former warn out self.

Unfortunately, and I will stress, it wasn’t all down to my gassing, this frivolity took time and it was almost 1pm before we set off again – the first quarter of the ride had taken almost three hours. Still, the next section was relatively flat and started by going on a gravel path which Dylan enjoyed. Unlike the woman who was walking her dog with her family who was frustrated by our waiting patiently whilst her animal got out of our way. Somehow, not ringing our bells as we were heading towards each other in full afternoon daylight would have made a difference.

As discussing the stupidity of pedestrians is one of our favourite past times, this just added to the enjoyment of the day. As did the field of alpacas; the fact that, according to Adrian the bikeshop man, 75% of the roads on the island are silky smooth and the fact that we were currently experience no hillage. Well, not until Gurnard when everything started pointing upwards in an extreme and unfair manner. So painful and sudden was the imposition of this upness, we stopped off at the first non-pretentious pub we came across, took our shoes off, ate battered sea food whilst looking out over the Solent. The first half was finally done.

For me, the next section was the worst. Heavy with a slap up meal and a pint and, at 3pm, five hours in, we had to fight our way up the mother of all steep hills in Cowes to get to the Chain Bridge which didn’t help when it came to being in a fit state to work the most complicated ticket machine in the world. Ever!

Still, albeit over in seconds, Dylan and Black Thunder were enjoying their second ferry trip in two days and once on the other side it was time to test the signposting as the Wahoo route had reached the end. Despite the blue on white clockwise signs (as opposed to the inverted white on blue anti clockwise signs) never missing a beat, it didn’t stop GPS separation anxiety and regardless of the hills and the ridiculous amount of traffic the Isle of Wight Ferry had just dumped on the island, I couldn’t relax until I could see the reassuring chevrons of truth on my Wahoo.

Before we knew it, we had reached Fishbourne and were back in the country again undulating through the third section through St Helens and on to Bembridge and a pub shaped like a boat and a, this time deserved, refreshment stop.

It was starting to get a little late by the time we had started the last quarter, and I was a little nervous that, having only my prescription sunglasses with me, visibility may get a little tricky. Unfortunately, although I had found my second wind, it was Sandra’s turn to feel the tiredness, but we were soon just we were on familiar roads again, retracing our steps from the night before and although that still meant we were around 8 miles out, at least we knew what was coming! 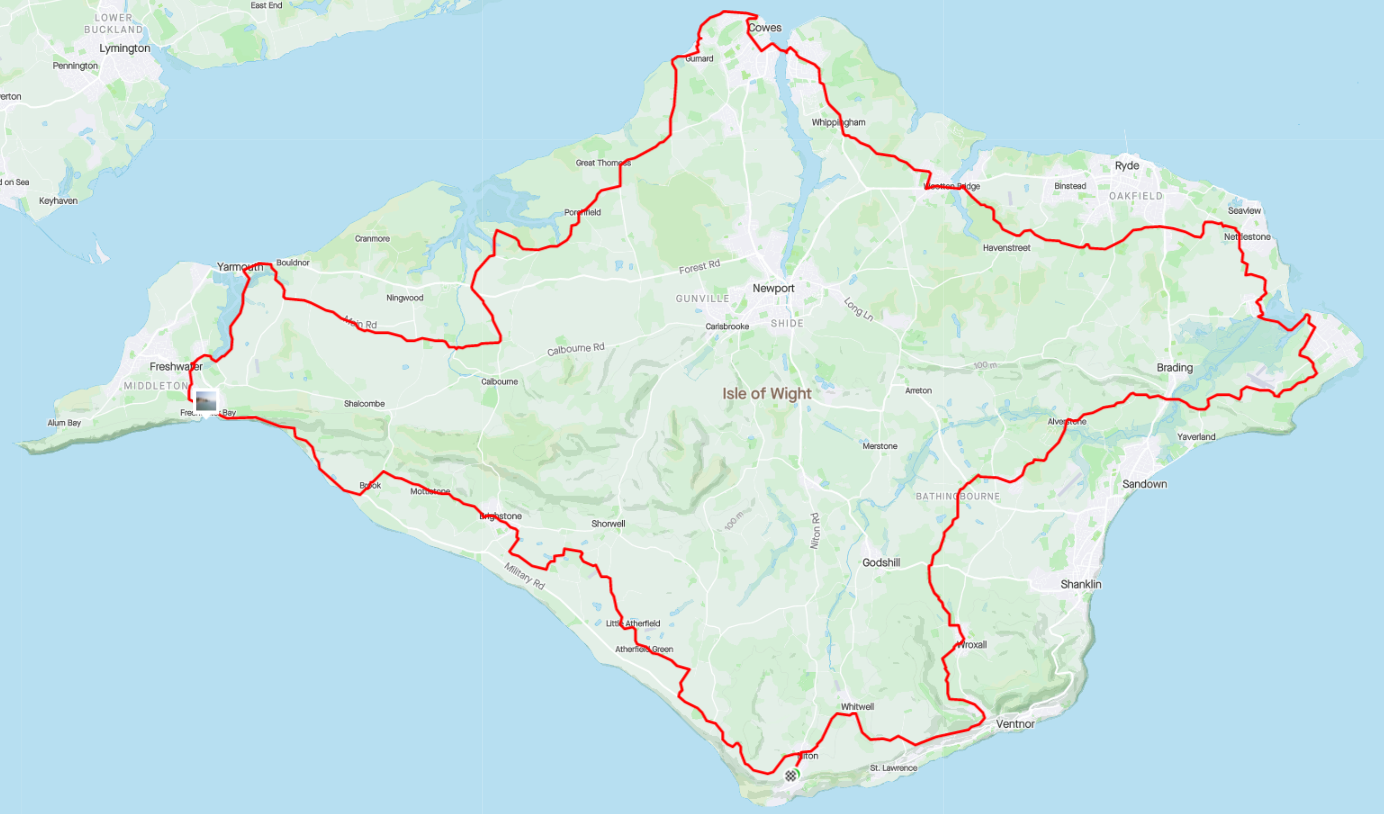