As we were living by the philosophy of Komoot for the next few days and, with that philosophy clearly stating we would be travelling at a mere ten miles an hour, we needed an early start. Alarms were set for seven, but due to the antiquated heating on the thermo-nuclear setting of its two options, I was cooked and out the oven well before that.

By seven o’clock we were beginning to pack our panniers and saddlebags which had somehow exploded their contents over every inch of the room, despite only having been in the hotel for a matter of hours. We multi-tasked this with a breakfast which was unfortunately quite unspectacular. Far from sampling a traditional full Scottish breakfast as Sandra would have hoped for, we had to make do with a couple of nut bars from the M&S.

We will probably have to put the fact we didn’t get going until 8:40 down to being out of bike-packing practice and not the procrastination that comes with just one more cup of tea. Still, with 75 miles to go and accounting for lunch stops, Komoot’s estimation of our arrival in Keld at around 5pm would still give us plenty of time to get to the pub for tonight’s evening meal at six.

It took just less than an hour and a quarter to retrace our route back to Carlisle and another half an hour before we decided to have a proper breakfast stop in the little village of Dalston. Yes, Dalston, the ever gentrifying outreach of Shoreditch with it’s newly established M&S Food Hall and Pret a Manger… Sorry, what? not that Dalston? Humorous misunderstanding aside, we parked the bikes up outside the cafe and waited for our scones to be delivered by someone who had probably never even heard of anything so ridiculous as a manbun.

One hot chocolate later, we managed around half a mile before having to stop and wrestle with Sandra’s Alpkit handlebar bag. We had established on its very first outing two years ago that the mounting straps aren’t very well designed. To say they are a little hit and miss as to whether they’ll effectively stop the bag falling on to the front wheel is an understatement. Noticing our struggles, the ever friendly locals informed of us the presence of a bike shop in the village, but with Sandra’s expertise and a really long bungee, we were on our way again.

Komoot takes us off road

The journey up to this point had taken us through a lot of well maintained, paved, off road cycle paths but, just out of Dalston, this mud was about to get real. A left turn off the main road and the surface deteriorated to gravel, then to mud, then to grass, gravel, mud, gravel and probably mud again. The actual order of surface type may have differed, but suffice to say we covered just two miles in half an hour. Although, stinging nettles aside, great fun was had by all we had only covered 20 miles in three hours. At nearly 12 o’clock, we weren’t even sticking to Komoot’s conservative pace of ten miles an hour.

The next two hours were much closer to Komoot’s schedule and although we didn’t exactly make up time, with quiet, gently undulating country roads and a six mile descent, we didn’t lose any either. With rain introducing itself as being being the weather of imposition during this part of the route, we rolled into the halfway point at Penrith looking to find a dry place to eat lunch. I had in mind a cafe that sold cake and the finest wines known to humanity, but we settled for a pasty and a salad on the covered forecourt of a petrol station.

Coincidences of coincidences a group of cyclists, who had also left from Gretna this morning on a John o’Groats to Land’s End adventure, arrived at the same time with the same idea. We spent the next half an hour, swapping cycling stories, waterproofing up and refueling before going our separate ways.

We set off again at 2pm and, with 37 miles and an estimated three and a half hours still to go, our ETA was beginning to deviate further and further from the 4pm we had originally hoped for. It wasn’t long before the scenery was starting to look more dale like and we weren’t far from in the National Park itself. Unfortunately, as you can’t have dales without hills, we were coming up against the toughest part of the ride.

By three o’clock and mile 47 the situation with the schedule hadn’t improved. As we negotiated a narrow footbridge over King’s Meaburn’s unfordable ford, we admitted the inevitable to both ourselves and Alicia that we were running at least two hours late. Now we weren’t likely to get to Keld until well after the pub o’clock ship had sailed.

Not cycling through that
Narrowest bridge ever

If doing something twice makes it traditional, then we took the traditional stop at Kirby Stephen prior to tackling the big lump of a Pennine between us and Swaledale. Here, we made the six of one, half dozen of the other decision to tackle Lamps Moss rather than Tan Hill because, with 60 miles and just over eight hours in the legs, the shorter route seemed more appealing.

More appealing to Sandra was the idea of a taxi and, having reached Nateby and the start of our four mile climb, I immediately saw the attraction myself, despite my initial feel of disdain at the very mention. However, with a slight bonk on, I started walking upwards almost immediately and the next 70 minutes mainly involved hike-a-bike with minimal cycling whilst hoovering up every last bit of nutrition in my handlebar bag.

Gloomy and foreboding
Onwards and upwards

The weather hadn’t let up since Penrith, with the clouds getting ever lower and the wind ever stronger as we got ever higher. It was difficult to know what the biggest challenge was when the wall turned to false flat: staying upright or seeing ten metres ahead.

Downhill all the way

Everything was wet at that point, so it seemed pointless to add extra mileage by avoiding puddles. Still, the next few miles shot by and all our elevation gain was lost in a 20 minute descent of fast, twisting bends and, in my case, screeching disk brakes. Before we knew it, after ten hours on the bike, we were rewarded with a hearty shepherd’s pie in a warm yurt heated by a burning log on the, erm, log burner.

Day One: Gretna Green to Keld 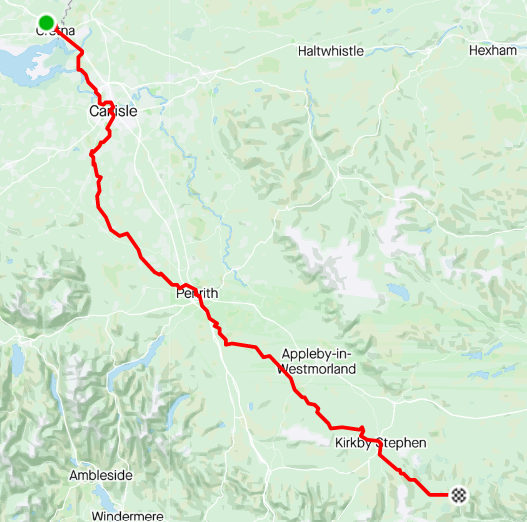