Our third day on the road started a little differently than usual. Notwithstanding that we were applying suntan lotion for the first time on the trip, we were still following our routine of waking at seven o’clock, eating breakfast, packing the bikes and generally getting ready. Today, however we were also putting ‘Operation Buy-A-Box-And-Fill-It-With-Stuff-We-No-Longer-Need-And-Send-It-Home’ in to action. Having an unusually descriptive title, it isn’t necessary to go in to detail, suffice to say, we left the hotel and headed towards the Post Office in the city centre.

As our return route showed, outward bound was unnecessarily circuitous around the ancient, cobbled streets. Frankly, it was nothing short of a Shambles. Puns based on street names aside, we were soon filling a box we had just bought with stuff we no longer needed so we could send it home. With five kilos of weight saved from Dylan and a couple from Black Thunder, the £25 it cost to complete this Operation would be literally worth its weight in offloaded hiking equipment.

We had entered North Yorkshire over the top of a cold, wet and windy Lamps Moss on Friday and, although technically left it briefly as we entered the walled City of York, today, north was going to transition to east. Our 80 mile route to Lincoln would take us out of the city on the National Cycle Network Route 65, past such delights as the old Terry’s Chocolate factory and York Racecourse before before joining the path of the former East Coast Mainline railway to Selby.

Historically, being in the Wapentake of Ouse and Derwent, we would have already reached the East Riding of Yorkshire but, that said, historically we would have also been riding down a railway line that was in regular use. This would have been both uncomfortable and dangerous so sticking with the modern day, at this point, we were still in North Yorkshire.

Selby and the Ouse

Trees that would have given rail networks managers a headache each autumn provided us with relative shelter from the force of the the southerly wind. When we hit more open areas towards Selby, however, the buffeting against my two pannier bags was like a parachute slowing down a rocket propelled car. Okay, it may have been more fitting to say ‘like fitting a wardrobe to the front of the bike’, but who’d do that? Either way, I was disappointed to find the benefit gained from ditching all that weight in York was nullified by poor aerodynamics. Sandra on the other hand was enjoying her new found unencumbered freedom with her inline saddlebags having far fewer wind related issues.

On the edge of Selby, Wahoo pointed us towards the forecourt of a factory with lorries pulling in and out with alarming regularity. Confused, and a little scared that we may end up being trafficked, I wolfed down a chocolate chip cookie for resolve and threw caution to the southerly wind. Quickly and stealthily we crossed through unscathed to a normal looking road at the other side and then on to a section of off road along the banks of the Ouse.

The biscuit had awoken a hunger in me I didn’t realise I had. Perhaps it was the fast-ish run in to York last night, or the wind (did I mention the wind?) or even the steadily building heat, but I could tell I wasn’t going to be able toeat enough today. So a quick comfort break, an energy bar and off we went for the next mile and a half in the shadow of the towering banks holding in the mighty Ouse.

After a brief departure to cut off an unnecessary meander, we shared the next riverside section with a herd of cows and, despite being Britain’s most dangerous animal, they seemed somewhat disinterested as we clattered by. Unlike the gentleman who held the gate open for us at the end of the field. He was fascinated when I said we had cycled from Scotland, and even more interested when Sandra explained our plans in comprehensible detail.

Drax Power Station
I told you it was windy

After saying goodbye, we attempted our crossing of the River Derwent at its confluence with the Ouse. All that stood between us and East Yorkshire was the Barnby Tidal Barrage. Now, throughout the country on bridal ways or footpaths there are a million different gate latch mechanisms, all designed specifically to make the user look a little silly. This one was no exception and despite assurances from the couple insisting it was open and that they had just used it, it didn’t fail to make me look a little foolish. Luckily, Sandra took over, and we headed off safe in the knowledge that we would never see those people again.

The roads were busier now. The Ouse starts to get industrial at Selby, and although we had been had been privileged with the quality of off-road trails so far, we were now heading towards trading estates, motorways and, in Goole, a major, inland port. More importantly, Goole has a Greggs so we picked up some sandwiches, drinks, and a packet of doughnuts, found a shady spot en-route and demolished the lot. Told you I was hungry.

The North Riding (of Lindsey)

On the other side of Goole lies vast swathes of wide open, flat farmland which according to Komoot is mainly below sea level. The machinery needed to farm this land is also vast and when you are on a bike and three combined harvesters and a couple of tractors are pulling out of a field, it’s a good idea to let them go. Besides, we had no rush to turn right in to a headwind. With very few hedgerows to protect us, it was here that I realised that there would be no respite for the remainder of the journey: no wind to blow us along and no hills to freewheel down.

We crossed in to Lincolnshire unceremoniously, on a dirt track between Swinefleet and Crowle. There were no signs, no change in scenery, just the same old fields until we reached the Stainforth and Keadby canal. But we had, after all that talk of moving from the North Riding to East Riding, gone back in to a North Riding. Historically Lincolnshire is split in to the three Parts of Kesteven, Holland and Lindsey with the latter being split in to North, South and West Ridings. So, valid observations all round and, this time, historically speaking, absolutely no chance of being struck down by steam trains.

Hiding from the heat
Stainforth and Keadby Canal

Tenuous historical references aside: back to the canal. For us, a five mile long, die straight gravel path leading to the River Trent and a perfect place to take 20 minutes out of the sun underneath a large concrete bridge. With cooling concrete banks to lie down on and cooling water to dip hats in, by two o’clock we were slightly more refreshed.

The illusion of mountainous terrain

Moving on we crossed a railway line by pressing a button to open the gates and, as per the instructions, running for our lives, before less dramatically using a normal bridge to cross the River Trent. From there we followed the east bank banking south (excellent sentence) for a few miles.

Turning left we started the longest climb of the day. Skirting the peak of Hardwick Hill, through Laughton Woods and topping out in Corringham, 14km later. The descent was an equally impressive 9km down in to Saxilby and the Fossdyke. Two things. Firstly, I may have over egged this somewhat. The climb didn’t actually rise more than 15 metres with a 1.1% average gradient with 0.5% decline. Secondly, the biggest climb, which overshadowed this entire route, was still to come.

Sandra on the Fossdyke
Lincoln Cathedral making an appearance

Once on the Fossdike, there was no chance of hyperbole along its flat four mile tow path in to Lincoln. It wasn’t the quickest route to our hotel. We could have gone straight Saxilby, but Sandra wanted to see one of my old childhood haunts and what better way than to show off the Cathedral and Castle. This did mean we had to ride up Michaelgate, an official top 100 climb and staple of the Lincoln Grand Prix.

In the tyre tread of the Lincoln GP

So, off we went wriggling our way through the streets of Lincoln, dragging panniers and all up the steep cobbled road. Irritatingly, I stopped just short of the Strava timing line at Wordsworth Street, so my time was slower than it should have been. Once I had put my lungs back in, I went straight up the final part of Steep Hill to reach the final summit and Castle Hill. This was, at it said, steep and by the top I was seeing stars.

After Sandra joined me at the top and had put her lungs back in too, we made our way back down the hill to the sound screeching disk brakes and the sight of the sun getting lower in the sky. In just four short-ish miles, we were at the hotel performing our nightly administrative duties of showering whilst doing the laundry.

At lunch we had a view of our hotel window on the first floor with bib shorts dangling precariously in the wind above beer garden punters. Putting thoughts of a wet chamois falling unexpectedly in someone’s face aside, and having already hoovered up our mains, we turned instead to thoughts of cake. Thoughts which were, by the magic of a COVID-19-safe-ordering-at-the-table app, to become an obscenely portioned reality in an instant. Defeated by almost all but a couple of mouthfuls of chocolate cake, I found there was a limit to my day’s hunger after all and with Sandra’s carrot cake safely ensconced in a doggy bag, we retired to our rooms to fall in to a food coma. 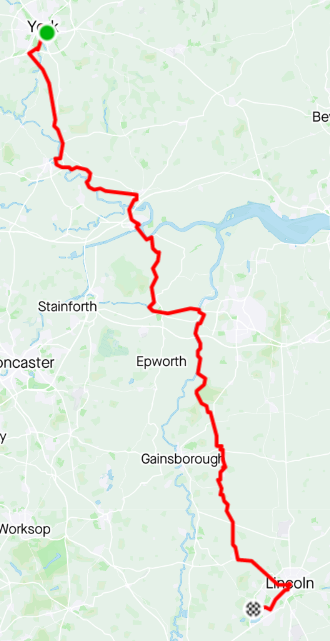 Ouse cows are these?