With Sunday morning picking up where Friday evening left off, the weekend in the Dales had become a sunny day sandwich stuffed between two slices of wet and windy bread. The weather, determined to be an influence in today’s journey, started in the early hours by trying to simultaneously launch the yurt on a flight across the dales and on a voyage down the Swale.

I was confident that the yurt was made of sterner stuff, so I concentrated instead on ignoring how miserable the ride would be if these conditions persisted. Even the thought of trudging the 20 metres or so to the toilet block didn’t have enough appeal to overcome my bladder’s protestations. When we finally did crawl out into the world it was stoney grey and as cold as similarly coloured steel. Base layer, jersey, arm warmers, leg warmers and two jackets weren’t enough to keep me warm whilst checking out and saying our final goodbyes.

On paper, this should be an easy day with the route being generally downhill as far as Ripon with an almost pan flat final 27 mile run in to York. There were no deadlines, no pressure, just us, our bikes, 76 miles and a strong westerly wind lay ahead of us.

Komoot immediately wanted to make the day as slow as possible by getting in a sneaky off road section along the Swale Trail before we had even left Keld. Wise to this, we chose the same road we took two years ago on the Coast to Coast ride and, once over the first few of our generally downhill-all-day up-hills, we were making good, wind assisted time toward Reeth.

Happy with our choice and the feeling we were at least 30 minutes ahead of the versions of ourselves who had chosen the drizzling, off-road option, we continued on through to Gunnerside where my Wahoo chirped a route re-joining acknowledgement. We shared another, final goodbye with Alicia and Linda who were hanging out of their car windows, waiving as they passed on an uphill section through Feetham, before departing from our tried and trusted route and putting our faith in Komoot’s option of a narrow bridge, an equally narrow road and near vertical steep hill.

Our options were limited: without a paper map, in an area with terrible mobile phone reception, we couldn’t quite tell whether sticking to the road would get us to where we wanted to be. So we turned left and let the bikes once again do their thing. It just so happened that the thing took 45 minutes to cover two miles to Reeth compared to the ten minutes it took to ride the next two and a half along the main road.

At this point, it was our signal to say goodbye to the River Swale and the Yorkshire Dales as we turned right up a steep hill alongside an MOD firing range. Although the weather had taken a turn for the better, and the rain clouds had mostly gone, it was at this point we really noticed how strong the wind was, hitting us side on and forcing us in to the verge at each and everyone of the breaks in the hedgerow. It wasn’t all bad as it proved quite useful when heading east up steep hills.

A few miles further on we sheltered under a railway bridge, out of the wind, to snack on pork scratchings and ascertain how close we were to Masham. Due to poor signal, we settled on it being ‘not that far, surely’ and set off again along undulating and oftentimes exposed roads. But, in the blink of an eye we descended toward the River Ure and crossed it into the outskirts of Masham and our designated lunch stop. To be honest, the town is too small to be considered as having outskirts but being the largest place we’d seen since Kirby Stephen and it being swamped by a gazillion motorcyclists, it seemed like a sprawling metropolis.

A tale of two breweries

COVID-19 makes places get fuller, quicker whilst still appearing empty and, despite being Yorkshire’s brewing capital, it was seemingly impossible to get into a pub garden with the bikes. So, far from being able to sample a Black Sheep Best or a Theakston’s Old Peculiar in their natural environment, we made do with a panini and a potato from the local cafe. On top of that, during our brief visit, the only glimpse of a brewery was Theakston’s chimney peering over the top of the houses. Luckily, I had visited 15 years ago, and had some ready made photos.

The steepest of the generally downhill uphills

Finishing off our food in the main square, amongst those trazillion motorcyclists (some more had turned up), we had become brave enough in the afternoon’s warmth to remove some of the layers so needed earlier in the day. I also took the opportunity to study the profile and could see that what was coming next would be one of the steepest uphills of our generally downhill day.

So off we set with just over half way remaining, over wall, after wall, after wall for the next eight miles finishing with a long climb out of the valley in which the ruins of Fountains Abbey are set. But that was it, after a short, easy off road gravel excursion we were on our final descent to the flat 27 mile run-in.

As we crossed the 19th Century iron and wood Ardwark Toll Bridge, the River Ure played its part once more along with the River Swale which joined the party just four miles upstream. The transition from one distinctive part of the country to another seemed complete when, just over a mile further down stream, the Ure became the Ouse, the river that runs through York, through its confluence with the Ouse Gill Beck. With the villages now showing the ‘on-Ouse’ moniker we were close enough to finally give in to pub based temptation. With the Dawney Arms in Newton-on-Ouse being conveniently on route, our resolve broke.

A short stop later, the sun beginning to get low in the sky, we rode the last few miles on the cycle paths into the city centre and to our apartment for the night. With a supermarket and curry house conveniently situated close by, we were soon enjoying a relaxing evening of beer and biryani in front of the telly. 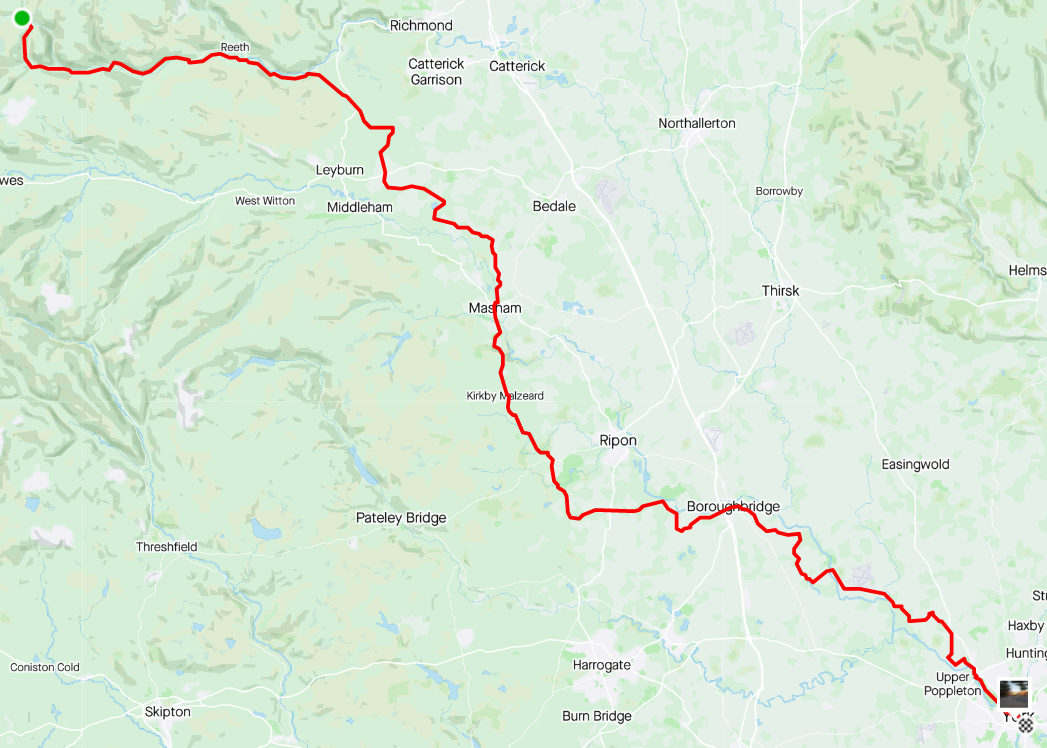 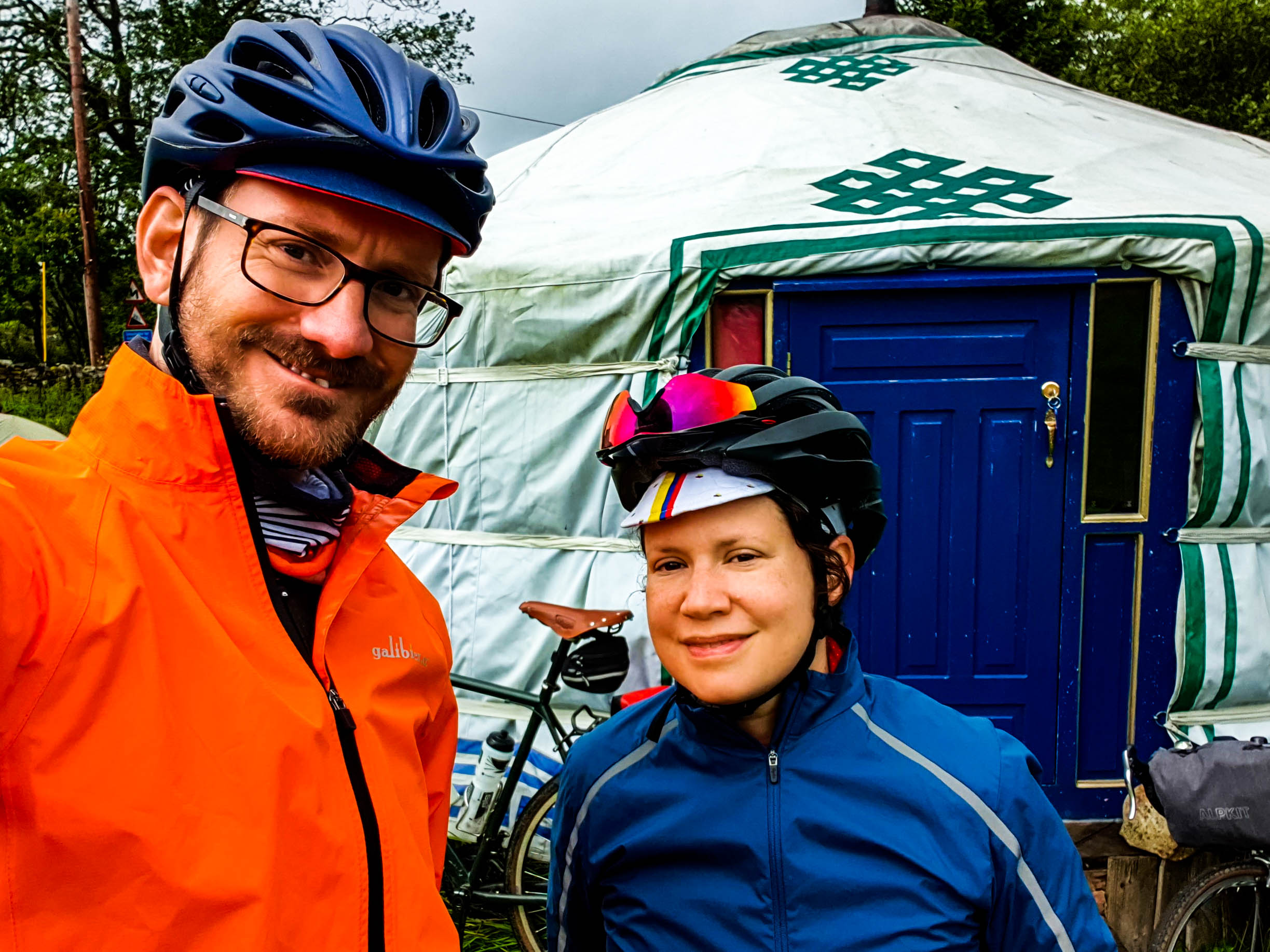