The last day of our holiday was greeted, when we opened the curtains, with a distinct lack of inclemency in the weather. The storm that had us pinned down for 24 hours had gone its prevailing way as quickly as it had arrived.

After a quick breakfast of ‘everything we had left in the fridge so we didn’t have to throw it away flakes’ we packed all our stuff and headed off to the €5 bargain of a bus for the 58km trip down the Ma-13 to Palma. Apart from seeing signs to Buger, the trip was uneventful and before we knew it, we were dropping our bags off with a man at left luggage who saw it as a challenge to lift Gigantor without herniating himself, or at least to show no signs that he was herniating himself.

Despite being in obvious pain, he was still very helpful, gave us guides to the city and told us to follow the red path in to the old town, which we think we did.  It was strange, after being in Alcudia which had seemingly shrunk in size in the off season, to see a city with open shops and people going about their daily lives. We had begun to think that nobody actually works in Mallorca in any other industry but tourism, but we were able to go to shops and had a choice of which bars and restaurants we could go to (except when it came to hunting out craft beer, but that is another story).

After seeing the unique tree, which just seemed like a more unruly, less trimmed and probably a lot older version of other similar trees around the city; the Old Town including the castle and town hall and some churches which, to be honest all looked the same; and a very bored horse, that would have given Eeyore a run for his money, we started hunting for food (actually, we started looking for beer, but, did I mention that is another story?) Our search was complicated by the fact that we had so much choice and that we were filled with so much indecision, but, eat we did, and dessert also did we on a million tonnes of churros.

And that was that. Both stories ending in the same place, collecting left luggage from a now double herniated gentleman and waiting for a bus to the airport (which incidentally cost as much for an 8km journey as the earlier 58km one did). 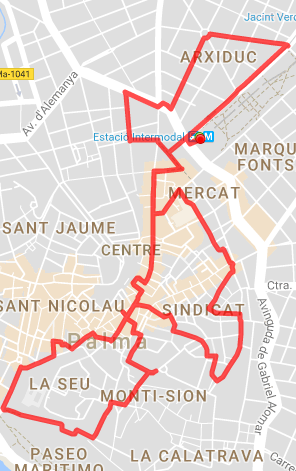