With Alcudia being where Alcudia is, getting in and out means, generally, travelling on the same roads.  So once past the largest Burger King sign that apparently only I can see, and along the coast road until Can Picafort we were able to concentrate on our two goals today: ride 50 miles and visit a town called Buger. The latter was for the sole purpose of posing for a photo by the town’s sign which would be frankly hilarious.

With a hill looming that we had already climbed, we decided to take a detour back to the coast so, as it would turn out, we could find a much prettier one, preceded by a lot of down, a hairpin and then a lot of up. The road then oxymoroned by sort of levelling out to an undulating stretch of road for the next few miles before dropping down right in front of the bar we went to yesterday.

Once suitably caffeinated and fueled with cake, we headed off to Buger through familiar Muro and a landscape dotted with brightly coloured windmills .  With the town itself being at the top of a very hilly hill, the hilliest of the week so far in fact, we were tempted to stop at the halfway point where the sign was, but, if we had we would have missed out on a fountain shaped like a candle and if that isn’t worth leg pain, I don’t know what is!

Once back on dry land, or at least lower altitude, we started the winding road back towards the coast. We missed Sa Pobla town centre ever-so-slightly meaning a cafe lunch wasn’t on the cards so pushed on home, practising the no handed riding and on bike energy gel consumption along the same roads we came in on yesterday. I say pushed on home, it seemed more appropriate to grab a sneaky beer at the Cafeteria El Passeig to celebrate hitting both our goals for the day. 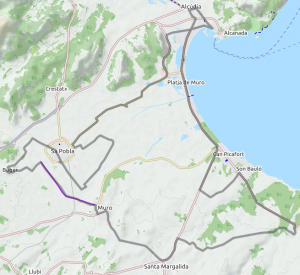