Hilariously, although ten minutes by courtesy bus, the Hampton by Hilton Hotel is a mere two minute walk (five minute wobble) from the terminal so, needless to say, after a ridiculously early breakfast, we started our journey on foot.

Once through the inconvenience of having to check in Megantor, and Sandra’s equivalent, and having to endure security, we could get down to the proper business of being on holiday. And what better way to begin than to bag another Wetherspoon’s carpet at The Windmill before hopping on to the monorail to our get gate? Well, bagging a Wetherspoon’s carpet at a time a normal human being could justify having a pint of beer, for one. There were a lot of not so normal human beings.

One flight over the snow covered Pyrenees, not so snow covered Barcelona and the Mediterranean later we landed at an almost empty Palma Airport and, as we walked out of the terminal building, we were greeted to brilliant sunshine and palm trees. With slightly fewer circles to walk around than at Stansted, we soon found the bus to the city centre and the Estacio Intermodal for our connection to Alcudia. With us stopping only for carrot cake, coffee and a Sunday timetable, before we knew it, the 351 Coach was pulling into Alcudia just a couple of hundred metres from the Carlos V Apartments, our home for the week.

Our evening wander in to the Port D’Alcudia took us past closed restaurants and entire hotels mothballed for the off season; it took us past far more parked cars than people and it took us past wrapped up locals who looked at us strangely for being in shorts and t-shirts. But we did find tapas and paella at one of the few open restaurants, the Bellavista Club, overlooking the Port d’Alcudia and the most pointless bridge ever whose purpose was seemingly to just span nothing in particular.  Still it looked nice, so the architect was probably happy. 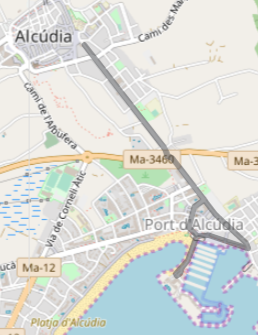