It is difficult to say if we could have accomplished yesterday’s and today’s route in one go. With a combined moving time of nearly 13 hours, it would have certainly been a late one with an arrival into Gairloch at around 9 pm. With almost 2,000 metres of climbing, it could have been later still.

But, at this point, we realised that there was no need to make back the lost time straight away. The hillier end of the North Coast 500 could be taken a little steadier. With deer and Highland Cattle to photograph; relentless scenery to immerse ourselves in to; and absolute silence to appreciate, now was not the time to stick to a military schedule.

Besides, carrying on to Shieldaig would have finished us off after the Bealach na Ba. The steep, seemingly never ending undulations throughout the 40 km from Applecross, the small campsite at the far end of the village would have been far too tempting to pass by.

It was also the only village of any note since Applecross. Now, if you don’t want to take a break here, then you can avoid at least part of a short, sharp climb out of the village by sticking to the main road. Frankly though, that would be an error, and would mean you miss out on the well stocked local shop; cake at Nanny’s Cafe; and even the opportunity to kayak on the loch.

We decided to go in to the village and partake in, and of, all but the kayaking due to our lack of upper body strength as cyclists. The break was the perfect set up for an easy second half to the day. Once the 2 km, 90 metre wall out of the village was done with, the big climb of the day, winding its 13 km way over 120 metres of elevation, never really got above 3%. Before we knew it, we were descending the same distance down towards Kinlochewe.

Had we turned right here, we would have been back at The Midge Bite Cafe from day one after a mere 16 km. We had clearly been around many of the houses, so were glad that the left turn to Gairloch was significantly more direct.

As we started along the banks of Loch Maree the overcast skies were becoming ever more threatening. With lights on to combat the gloom, our fast paced, relatively flat progress was slowed by the road going upward again. It was dampened further still as, what started as the odd drop of rain suddenly turned into a deluge.

With water streaming down the road, I found a shelter under a tree whilst the rain died down and Sandra to caught up. We both agreed without hesitation that a nice warm hotel room was the order of the day. As we reached the edge of Gairloch, at a very reasonable 5 pm, we found the Heatherdale Bed & Breakfast. Although the driveway was steeper than most of today’s climbs, the room was top notch and came with biscuits; there was space for our bikes; and there was a pub just 100 metres down the road. 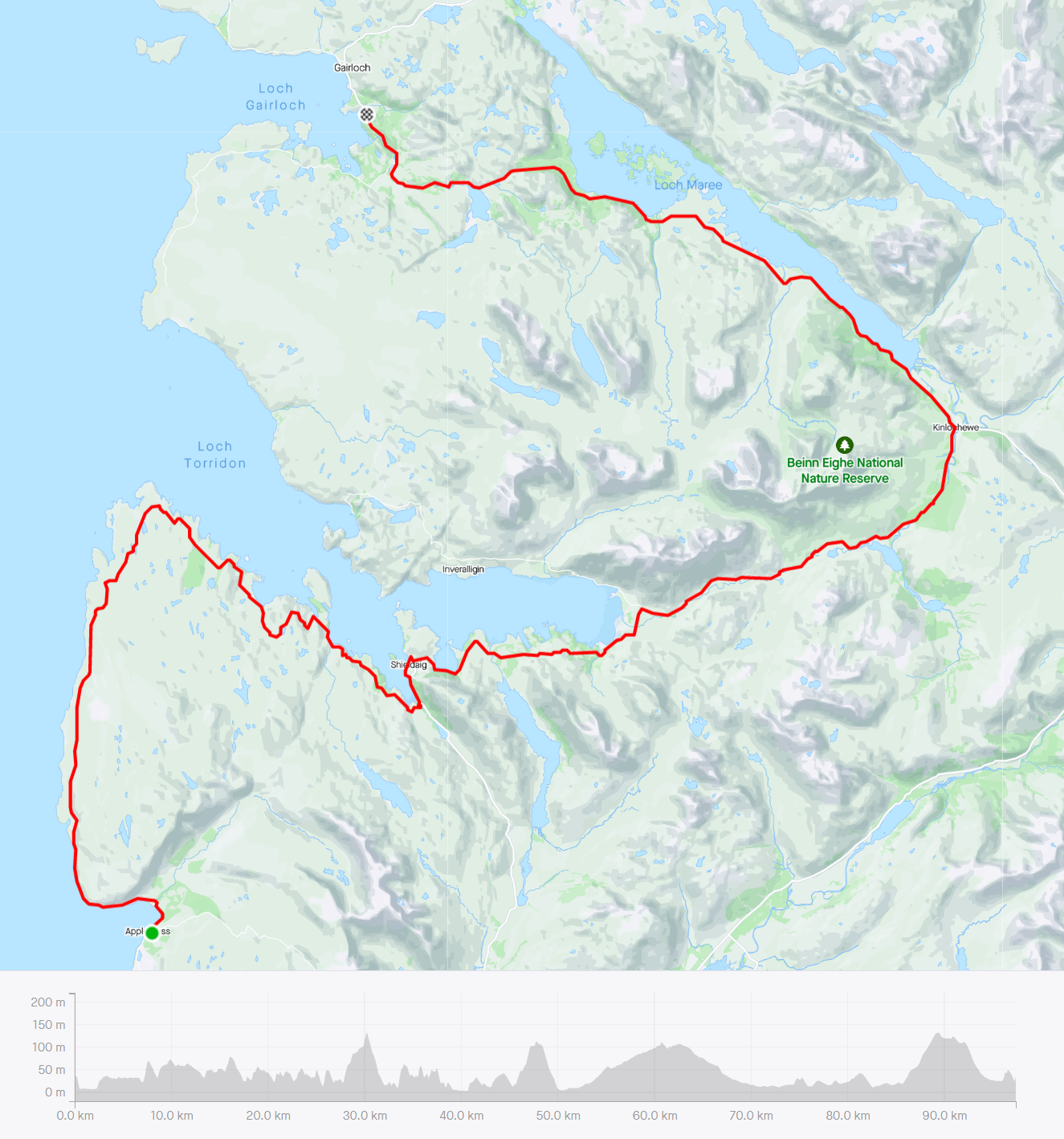