I mentioned before that the n+1 voice in my head had won out really rather early in my TT career.  In my defence, I was being sucked in by the perfect storm of marginal gains and massively discounted framesets.  From day one, I started to become interested in how I could get better.  And that is completely measurable. It’s one of the best things about doing the same courses every other week.

Each time trial would reveal new areas of improvement: position on the bike; gearing choice; saddle height; and probably, most importantly experience to get the pacing right.

But who cares about pacing? That will come. This is about buying speed by building my own TT bike.

When I bought the frameset back in July, I had a vague plan in which stuff would happen at unspecified times resulting in a complete bike by the start of the TT Evening Series in April. In reality, this woolly approach to procurement could have sent me hurtling down the route of an ever expanding parts bin, full of heavily discounted bargains, that weren’t quite right. After buying a set of Pinarello Most TT Bars with integrated stem, with almost zero adjustability, I decided to reign it in a bit and not make my component choice influenced by the level of discount alone.

So, to the drawing board and a component list that would include mechanical Ultegra; compact chainset (cos my knees don’t like pushing hard on a 52 tooth on the front); and 12-28, 11 speed cassette (as there were too many gaps on my road bike’s 12-32). Now there was something to aim for.

Big in cycle news over the last two years has been the shortage of parts due to the pandemic (and failed hand brake turns in the Suez Canal) and I can’t pretend that this build wasn’t affected. In reality, this had limited impact on the project and it just meant having to source parts from a wider variety of retailers than I might have done ordinarily.

Otherwise, on the one hand, I would have liked to experiment with 165mm cranks as per a video I watched on the benefits on shorter cranks for time trialling but these were not forthcoming. On the other, I lucked out with the frame size, despite its limited options due being an end of line, previous season model.

To build or not to build?

I hadn’t set out to build the bike myself. Rather, I had imagined I would collect the parts and hand them over to a qualified mechanic at a proper bike shop to do the hard work. However, by mid January and with the majority of the parts in my my possession, I started weighing up the cost of a professional against buying the tools myself. Partly because of the hassle of going outside and speaking to someone real, and partly because everyone loves buying tools, I chose the latter.

Other than a really big torque wrench and a specific bottom bracket tool, and a suitable hacksaw and blade and jig to cut the forks down, I had all the tools I needed for the job.

The new additions came from a variety of sources, but I did investigate non-bike specific tools for some of them. Park Tools are excellent, but a torque wrench from ScrewFix capable of 50nm is a third of the price. Also, carbon specific blades for cutting carbon forks don’t work as well as a standard 32tpi hacksaw blade.

I also bought a fourth hand cable puller from Draper Tools, but I couldn’t work out how to use it. I am just glad it only cost £12!

It’s amazing how much small stuff goes in to building a bike and how many bits are missing when you start thinking about putting the rather large jigsaw puzzle together. I had a headset, but no compression bolt; then I had a compression bolt but no stem cap and bolt; then I had a stem cap but no bolt. None of this particularly mattered. The stem in my parts bin was too small for the steerer anyway (that Most Integrated bar and stem was starting to look pretty sweet)!

Cables… £90 per brake lever and there were no brake cables! I was certainly getting the most out of priority delivery subscription from Wiggle. This kind of emergency purchase would not be the last on this journey.

But one, dark night in January, having dry fitted the front end time and again, over and over, it was time to cut the fork down to size. This wasn’t the only chance I would get – that will come when the position is finally dialed in, however, it was still nerve wracking. I watched YouTube video after YouTube video to ensure I didn’t get this wrong and more or less I didn’t. I was a tiny bit long because I was overly cautious on the cut line. It was nothing a larger spacer didn’t fix.

Nothing was going to be tougher than that, so at the weekend, I carried on with the rest of the build. For two days I was in a, erm, cycle of unboxing a component, watching a YouTube video, downloading and reading the dealers’ manuals, fitting the component and repeating. I found the dealers’ manuals indispensable as the level of detail compared to the basic instructions supplied in the box was huge.

No problem couldn’t be resolved without looking at YouTube, particularly GCN, Park Tools or Cyclist Magazine. I say no problems, some required a quick dash to the local bike shop to get hold of decent replacement carbon specific brake blocks as the ones supplied with the Prime wheels just wouldn’t go into the housing with either finessing or brute force.

The biggest challenge was also the final hurdle. Tubeless. The back wheel took days to seal and only did so after I had put twice the amount of recommended sealant. Other than the odd dribble, there was no messing with the front one: I immediately put more sealant than needed; I wet the side of the tyre so the remaining washing liquid, used to seat the tyre, highlighted leaks like an Ibiza foam party; and I set the wheel up in temperatures that almost exceeded double figures.

I did some limited research when trying to my set up my wheels. As far as I can tell, ‘Tubeless Ready’ tyres require the sealant to actually keep them inflated. I assume that the sealant fills any micro holes in the weave of the tyre and helps fill any imperfection around the bead of the tyre and the rim of the wheel. This seems to be in contrast to Mavic’s UST system which could, in theory, hold air without sealant (I assume here that the UST system requires a tighter fit between tyre and rim).

And then it was complete. All the components torqued to their correct levels; air staying in the tyres where it belonged, lube and grease in the places that lube and grease should be. A quick mile around the block even proved the gears and brakes worked. The next stage is for a proper shake down, but that is another story.

From Boxes to Bicycles 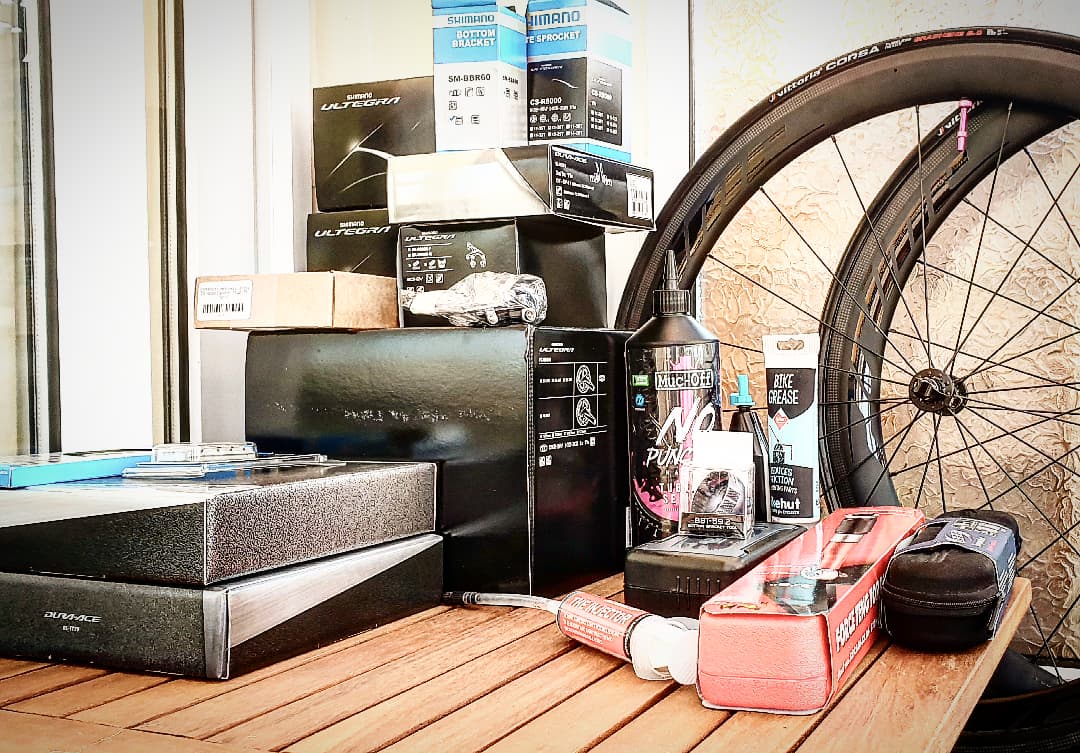 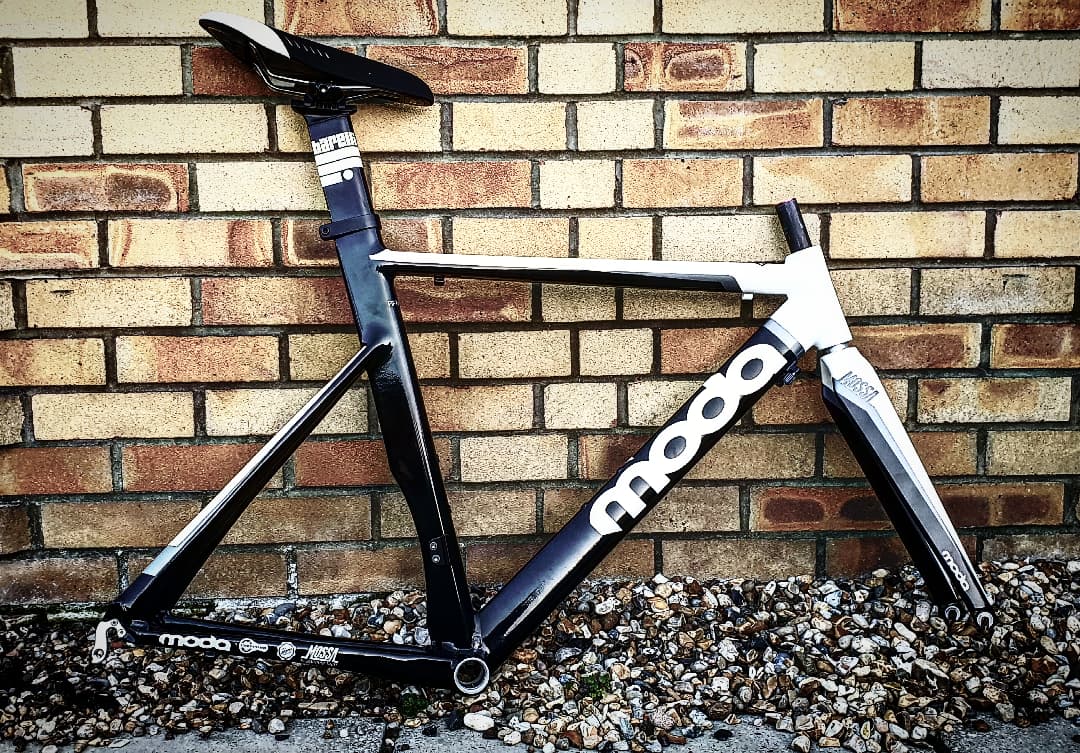 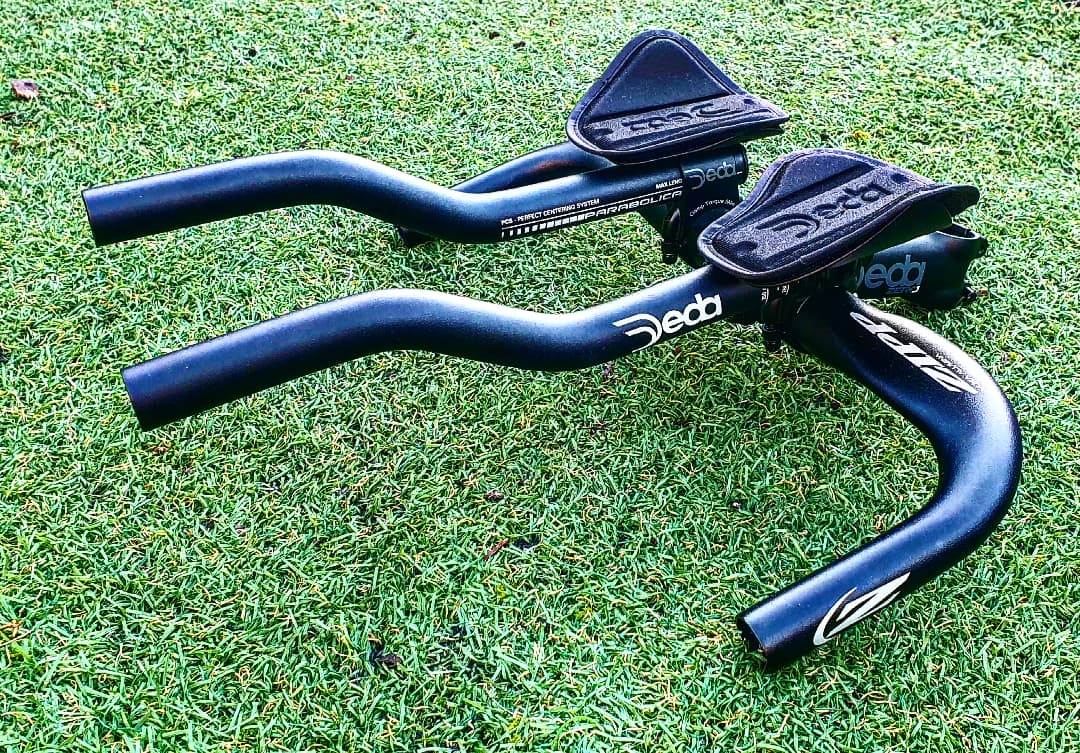