We awoke early(ish) in the morning to the sound of Paris which, despite what we are told, aren’t all that romantic. Unless, of course, the sound of rubbish being collected over the desperate tones of a whirring floor failing miserably to cool the room are you thing.

Today’s mission: explore Paris before it becomes totally consumed by Le Tour and even simple acts like crossing a road are rendered nigh on impossible. The question we were contemplating, whist sitting on the bed in our hotel room in the 3e Arrondisement, was exactly how we were going to do this. Was bringing our cycle helmets was merely an exercise in carrying unnecessary luggage, or were they going to serve a practical purpose?

Well, I certainly knew that I wasn’t going be wearing mine crossing the line on the Champs Elysee donned in the Maillot Jaune and, in fact, if I had a career in what the late Paul Sherwin elaborately labelled ‘the Sport of Professional Cycling’, it would have been during the Lance Armstrong era, so I may well have needed to take all manner of interesting substances just to make the time cut off each day.

Speaking of performance enhancing substances, we needed food and it wasn’t long after leaving the hotel before we stumbled upon the Beizh Cafe on Rue Vielle du Temple. Sitting outside, watching the world go by, eating crepes and drinking copious amounts of really expensive (but really rather good) freshly squeezed orange juice, we contemplated our bicycle choices. In weird, modern day Goldilock’s fashion, we dismissed the official Paris Velib bikes as being too expensive for a day’s riding; rejected the Mobike as it required stumping up 20 Euros just to use five; and settled on two Donkey Republic town bikes which seemed just right at 12 Euros for a whole day. As it turned out, these orange bikes were going to be cheaper than our orange juice.

Using the app, we stalked our prey like a Millennial leopard for around a kilometre before we found three on the Rue aux Ours. The first was locked up with the supplied chain which we assumed meant it was in use, but the other two were seemingly good to go. I say seemingly: one of them had a puncture which we only noticed when the bike was unlocked, but, if a sinking feeling can rise within you, it was certainly short-lived. A quick button presses of the app not only let the Donkey Sanctuary know of my predicament, it processed my refund at the same time.

Our hunt continued towards the banks of the Seine, and soon Jamie joined Cassandra (which were their official names) for the next few hours and, with helmets on, we took our first tentative pedal strokes in the city. With the main road along side the Seine requiring full blown body armour, these first few bicycle steps were made quickly in the direction we had just come from so we could get used to our heavy Donkeys and Sandra used to flat pedals again along quieter roads.

Getting away from it all

And there we were, heading off towards La Cimetier Pere Lachaise to see some famous dead people. Unfortunately, these famous dead people didn’t want to see us as, apparently, you can’t bring a bicycle in to the cemetery, even if you don’t intend riding it. Indifferent to the news on the basis that the residents will be there next time we are in Paris, we went to the pub instead. Being called Merlin, it served magical beer and provided the inspiration for us to check out some dedicated cycle lanes and, through the witchcraft of the smart phone, we plotted a path along the Canal Saint Martin towards the park and gardens of La Villette.

La Villette is a big park with an open air cinema; with places where youngsters can do street dance competitions with their international cousins; and it offers a place where people sculptors can make mistakes, paint them yellow, put them on a plinth and call it art.

Back down to earth with a bump

Joking aside, it was a relaxing spot to stop a while and drink lemonade in the Parisian, heat away from the manic ebb and flow of the centre of Paris. But that manic ebb and flow awaits for no one and, as it was Tour weekend, we needed a quick jaunt along the Rue de Rivoli to pay homage. Sadly though, with all the will in the world, I would just have to accept that I wouldn’t be able to translate my efforts on a 14kg steel framed donkey to that coveted victory on the Champs Elysee. Not least because the section we rode along wasn’t part of the official course, but also, I imagine, if I was here in Paris, my absence from today’s time trial would surely have seen me eliminated from the race. Pity, I had a really good speech ready.

Back in the real world, it was nearly time to say goodbye to Jamie or Cassandra and we were heading towards a designated drop off area (no littering the streets by leaving your bike in inappropriate with these guys). However, , we first had to negotiate the roads along the Seine once more and for all the that the French love cycling, and cyclists for that matter, with cycle lanes that just stop at pinch points on one of the busiest roads in the city seems a little out of character. Still, we survived, and the adrenaline set us up with all the energy we needed to finish our day wondering around the Ile de la Cite and enjoying the atmosphere around the Tuileries as the city sank ever more deeply in Tour fever. 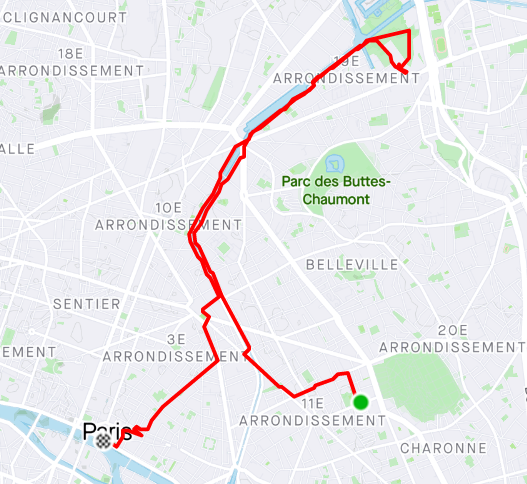